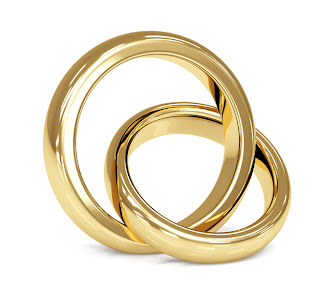 (I would like to share this article with you.  It's a thoughtful and respectful presentation of this controversial subject.  The truth and reasonableness of Fr Earl's argument shines forth brightly.)
What 'marriage' really means
Saturday, April 06, 2013 6:22 AM
The Salina Journal (www.salina.com)
G.K. Chesterton, fond of paradoxes, said that the more we make a word mean the less it means. When we say that we love people and pizza, that we love God and golf, we dilute the meaning of the word love. We devalue the currency.

A recent victim of such overuse is the word "marriage." It is now proposed that "marriage" be used legally for same-sex relationships.

Sympathy for recognizing same-sex relationships as marriage is understandable. The appeal is to freedom and love, rightly cherished values. But marriage is about more than freedom and love. It is also about truth. It is not just about the choice of individuals. It is about the fabric of society. It is about a unique male-female expression of love by physically complementary persons that in proper, natural conditions brings a new human life. Even in arbitrary social contracts, civil rights have limits. If boys can join the Girl Scouts, what does "Girl Scouts" mean?


In "Through the Looking Glass," Humpty Dumpty said, "When I use a word, it means just what I choose it to mean -- neither more nor less."
"The question is," Alice said, "whether you can make words mean so many different things."


"The question is," Humpty Dumpty said, "which is to be master -- that's all."
The master is truth, conforming to objective reality. Marriage is about a truth of human nature, the reality of human life and love in the form of male and female.


The uniqueness of the unity of husband and wife is a communion of love which, by its very nature, can create an entirely new human life with the world-altering responsibility to nurture that life with the same complementary form of love. If some such marriages do not or cannot generate a new life, the union is still of a natural design that does.
When a baseball player does not get a hit, the batter is still playing baseball, not badminton. The male-female complement is of the essence of marriage. No other relationship, no matter how loving or committed, can have the unique form of commitment and communion which exists in the potentially fruitful bond of husband and wife.


This union alone can bring a new human life and continue the human race.
For those committed to the Judeo-Christian heritage, the proper meaning of marriage is imperative. Scripture presents the covenant between God and his people in the image of husband and wife. The teachings of Christ on the nature of marriage are unambiguous.


To hold that marriage is a union of a man and a woman is not to deny a freedom to those who desire to make a same-sex commitment. It is, rather, to assert a freedom from legal coercion to endorse as marriage what is not the marital union found in nature and confirmed as such by many religious faiths. Freedom of conscience is paramount, both ways.
Those who choose a same-sex relationship would do well to find a new word for their commitment. "Marriage" is taken.


-- Father Earl Meyer is with the Capuchin Center for Spiritual Life in Victoria.