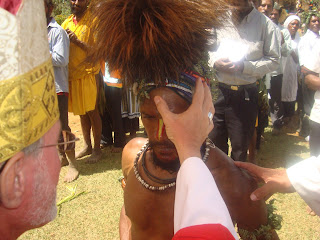 I just returned to Mendi after a Spirit-filled journey through the Western Deanery of the diocese.  (The civil jurisdiction which comprises the Western Deanery was recently separated from the Southern Highlands Province and became the Hela Province.) I would like to invite you to walk with me as I retell the story of this missionary journey (or "patrol") as some of the veteran missionaries would have called it.

It started with a grueling 6 hour car ride to Kupari (Tari) on Saturday, 27 April.  Grueling because of the condition of the road. Tari is about 120 km (75 miles) from Mendi.  We went first to St Joseph Secondary School in Tari for a farewell dinner for Father Dominic McGuinness, OFM Cap., who was leaving the school for another assignment in Madang.  Father Dominic is in his youthful mid-80's.  He's a saintly priest and will be dearly missed by students and staff of the school.  Fr Dominic has been serving in PNG for almost all of his  priestly life.  He is from the Capuchin Province of Great Britain.

The next day, we traveled to Paijaka - one of the pastoral areas associated with Saint Francis Parish, Tari.  We were greeted warmly by the pastor, Fr. Antony Kattupparra, OFM Cap. (from the Capuchin Province of Saint Joseph, Kerala, India) and his parishioners.  It is a rather remote area, but the Land Cruiser that we borrowed from the pastor of St Francis Parish, got us there safely.  There we celebrated the Sacrament of Baptism with a number of children and the Sacrament of Confirmation with some young people and adults.  It was a joyful celebration.  Afterward we joined in a simple traditional mumu - which includes pork, sweet potatoes, greens, etc, all buried in a pit and cooked by hot stones. 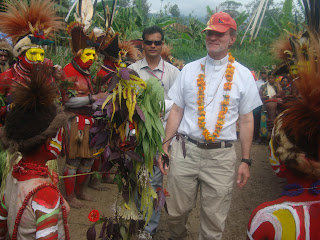 The next day we traveled to Tolapu for the blessing of a new church.  Tolapu is an outstation of Saint Paul's Parish in Komo.  We were greeted on the road and then accompanied to the church by a multitude of people, many in their traditional attire.  It is wonderful to see how the people are proud of their heritage and culture and happy to share and express it.  (Fr John Paulose, HGN is the pastor of the Komo parish and has the pastoral care of Tolapu and all of the outstations of Komo.)  After the mass, I had the opportunity to speak to the leaders of the parish community (and other interested parishioners).  I always try to spend some time listening to the people and sharing with them some of my priorities for the diocese.  After sharing with the people, we headed toward Saint Paul's Parish in Komo... 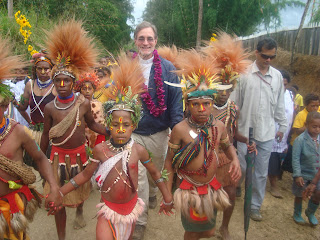 Before we made it to the parish grounds we were met by hundreds of Catholic school children and other parishioners who were there to welcome us.  They sang welcome songs and clapped their hands.  They surrounded Fr John and I with an honor guard of youngsters dressed in traditional attire and escorted us to the parish.  (That evening, before the blessing of the church the next day, we asked God's blessing on a new pastoral center that was built by the parishioners.  Here in Papua New Guinea, or at least in the Diocese of Mendi, a pastoral center is simply a building with a big room for meetings and activities... In other places, it might be called a parish hall.) 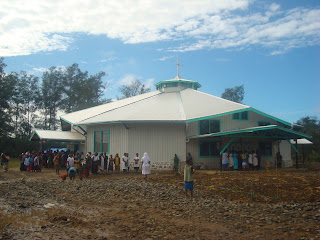 We were on our way to Komo to celebrate the blessing of their new beautiful new parish church and to celebrate the Sacrament of Confirmation.  The church was built by Brother Michael Thom, OFM Cap., with the help of his crew of tradesmen.  It was a dream come true for the pastor, Fr John and for the parishioners of Saint Paul Parish.  Komo is where they are building an airstrip large enough to land huge cargo transport planes carrying equipment for the Liquified Natural Gas (LNG) Project.  Fr John was able to enlist the help from some of the contractors and companies with some materials and logistical assistance.... however, there were no huge machines, e.g. cranes, used in the construction! 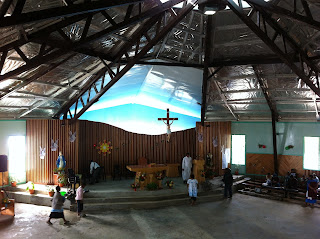 There are still some minor details that need to be attended to, but the church, both inside and out, is beautiful and a testament to the deep faith of the people.  It is one of the largest church buildings in the diocese.  (It is almost as big as the cathedral in Mendi!)  The majority of churches in the diocese are much smaller... and most of the church's in the 350 outstations of the diocese are built of bush materials. 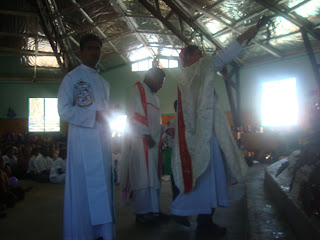 It is always a joy to bless a new church building ... it shows the growth of the Church.... 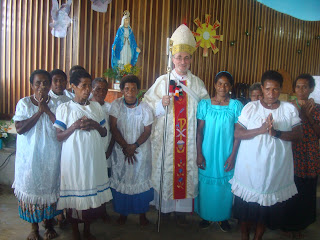 ...But the growth of the Church cannot be measured in buildings, but in the spread of the Gospel and the faith of the people.  For that reason, I was very happy to celebrate the Sacrament of Confirmation at the same celebration.  In my homily, I tried to stress the idea that we, the People of God are the Household of God.  We are the Spirit-filled, Body of Christ.  We are the Church.  The Sacraments strengthen us on our way to the Kingdom and help us be true witnesses of the Lord.

Fifty-one pigs and many other food items were shared in the celebration.  (There were 52 of them, but one managed to escape!)  Some of them were prepared for the mumu.  Some were given as appreciation to many people who assisted in the project of building the church.  In traditional PNG society, and especially in the Highlands, and more especially among the Huli people, the pig serves as a sign of wealth and prosperity... and as an instrument of exchange.

After the grand celebration in Komo we returned to Tari.  The next morning I celebrated mass at Saint Francis Church and then we prepared for the next stop....Saint Joseph Parish, Margarima. 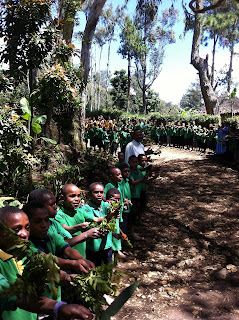 As we approached Margarima, I left the car behind, so that I could walk to the parish with all the people who gathered for the welcome.  I cannot express my feelings at the exuberant welcome that I so often receive.  I am always humbled by it... But then I remember, they are not so much welcoming Donald Lippert, but rather their bishop, their shepherd, one who represents Jesus to them... 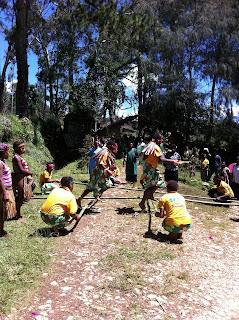 There were hundreds of school children and other parishioners who came for the welcome.  They even performed a traditional Bamboo Dance, which I had never seen before.  The joy that comes from the depths of our Catholic faith is pure and true.  I often thing of the words of Jesus in the Gospel of St John, "I have come... that my joy may be in you and that your joy may be complete!" 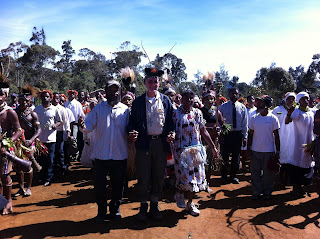 The Margarima parish is the largest in the diocese.  It consists of three major areas:  Upper Wagi, Lower Wagi and the central parish station at Homaria.  There are a total of 19 stations in the parish.  At present Father Matthew Panachipuram, CST is covering all of the stations.  He is able to get to all of them for Holy Mass and Confessions once a month.  We traveled the next day to Lower Wagi about an hour and a half from the main station - where again, there was a wonderful welcome.  I was presented with a typical headband.  (I think it looks better on the local folks than it does on me... But I was happy to wear it and the people were thrilled to see my joy.) 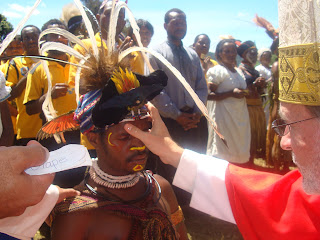 In the course of this 'missionary journey' I had the great joy of celebrating the Sacrament of Confirmation with over 400 people in six different celebrations.  Many  young people dressed in their traditional attire for the celebration.  Others dressed in western clothing.  Papua New Guinea is a country and a society in transition... struggling to keep the best of tradition, while adapting to the modern world.  It is not always easy.  Less than 60 years ago, the people in this region were living literally in the Stone Age.  They had traditions and customs to guide and protect them.  The confrontation with the modern world presents many challenges to the people.  I believe that the Catholic faith is a great support and guide to the people as they face these challenges.  (Our faith is a great support to all of us, as we face the challenges of our lives too!) 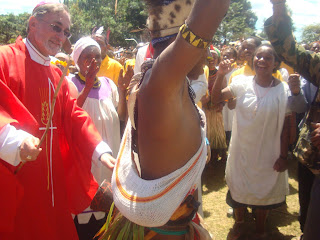 Specific to the Huli culture, there is a traditional Rite of Passage whereby the young initiates are struck by a stick to show that they are ready to face the hardships of adult life.  It is important, in that context that the young person does not flinch, but shows strength and valor.  That tradition has made itself into the Rite of Confirmation.  After the anointing with Holy Chrism, the newly confirmed are struck with a stick to show that  they are ready and willing to carry the Cross with Jesus.  (In the past, the universal Rite of Confirmation suggested that the bishop give the newly confirmed a gentle slap on the cheek to show more or less the same thing.)  I was hesitant to do it at first, but the candidates themselves said that it was important to them.  All of them, show a great bravery and strength and the people are there to cheer them on.  (I would not recommend this for other contexts, but it is very meaningful, given the tradition and customs of the Huli people.) 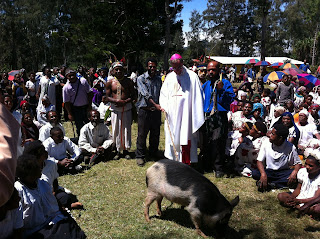 After the Confirmation Mass at the main station, the people made a very special presentation to me....my very own pig!  In the language and custom of the people, it was suggested that I would take it back to Mendi and breed it and then give the little ones to any people who would come to me in need.  I was touched by their generosity in sharing this very valuable gift with me.

The people had to walk, some of them a great distance from some of the more remote outstations to attend the Confirmation mass.  One group met with some 'enemies' on the road who drove them into hiding in the bush.  They made their way to another Catholic outstation.  They were frustrated and saddened that they would not make it for their Confirmation... So, after the celebration at the main station of St Joseph's Parish, we traveled to the outstation and celebrated the Confirmation Mass with this last group of young people.  They were very appreciative, but not more than I for having this opportunity for sharing the blessings of God's Spirit with His people. 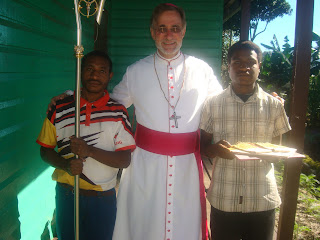 Pictured above are John and Max.  They received the Sacrament of Confirmation at the main station...and they assisted at serving the Holy Mass.... Both of them told me that they would like to be priests someday.  They asked for my prayers for them... and so I close by asking you, dear reader, to remember to pray for vocations to the priesthood and religious life.  God's Spirit is alive and active in the Church today as it was 2000 years ago.  We pray that all God's people, especially the young will be open and docile to the movements of that Spirit in their lives.