A Priest for Mendi

On Saturday, 24 January 2015, Deacon Elias Zambra was ordained priest in a colourful and inspiring celebration at Mother of the Divine Shepherd Cathedral grounds in Mendi, Papua New Guinea. 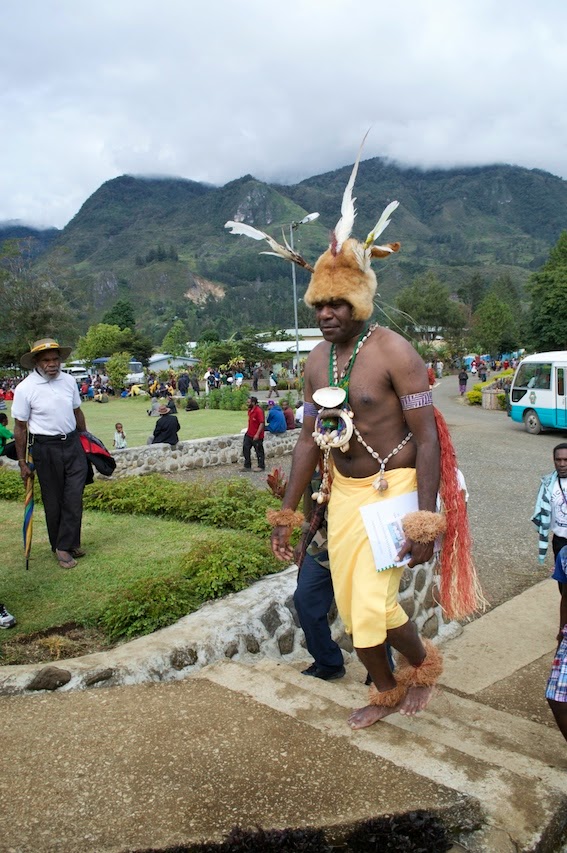 Deacon Elias arrives to the Cathedral grounds before his ordination to the priesthood.  He is dressed in his traditional attire.  His family is from Madang, a costal city of PNG, however, he grew up in the Southern Highlands and now considers the Diocese of Mendi as his home.  Papua New Guinea is rich in the diversity of culture, languages and customs.  The Gospel speaks words of comfort and challenge to all of us. 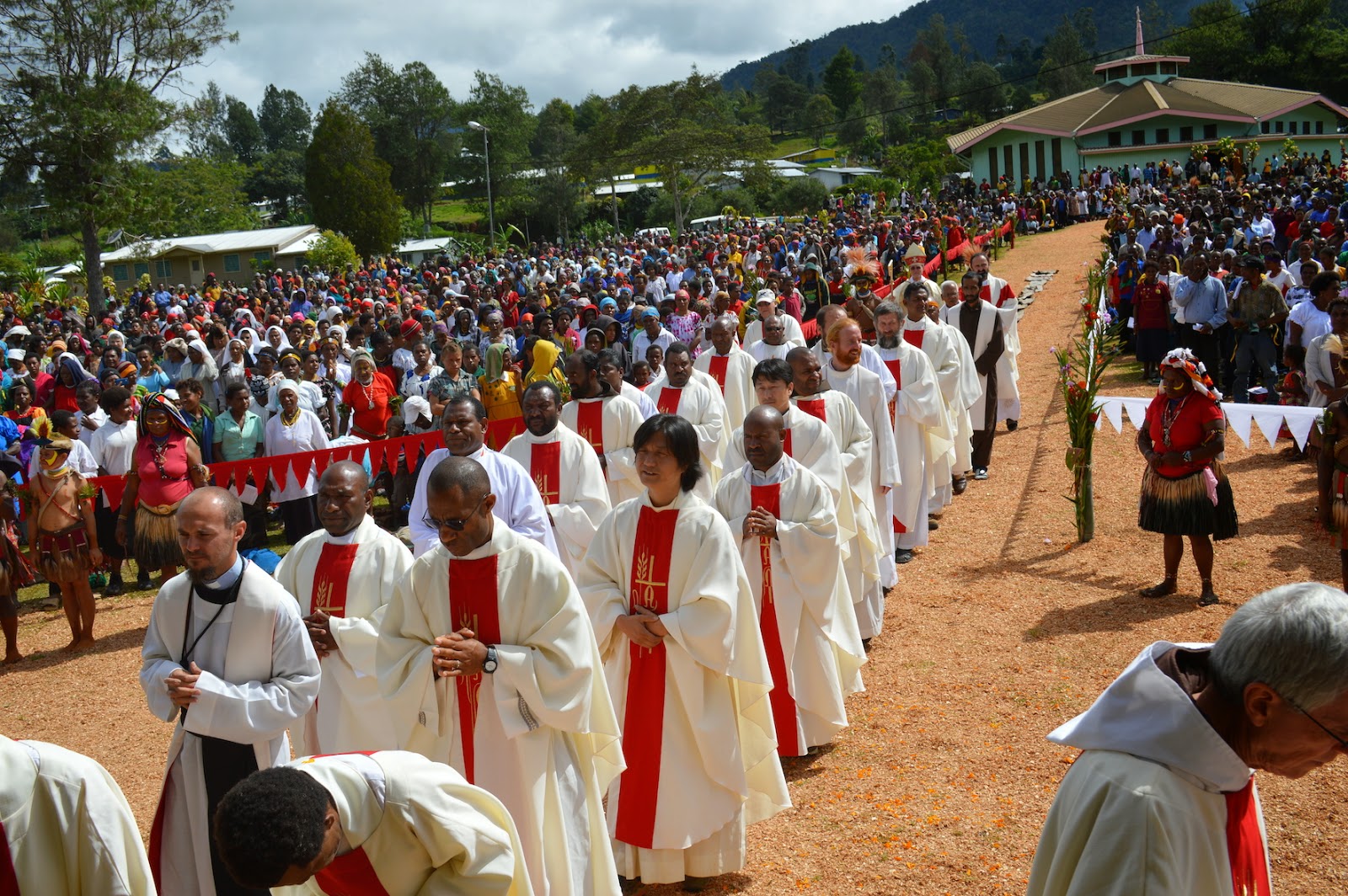 Concelebrating priests and other ministers were led to the altar by a traditional Sing-Sing group from the Hela Province.  The Cathedral is in the background.  The Holy Mass was held outdoors to accommodate the thousands who came to participate in this festive liturgy. 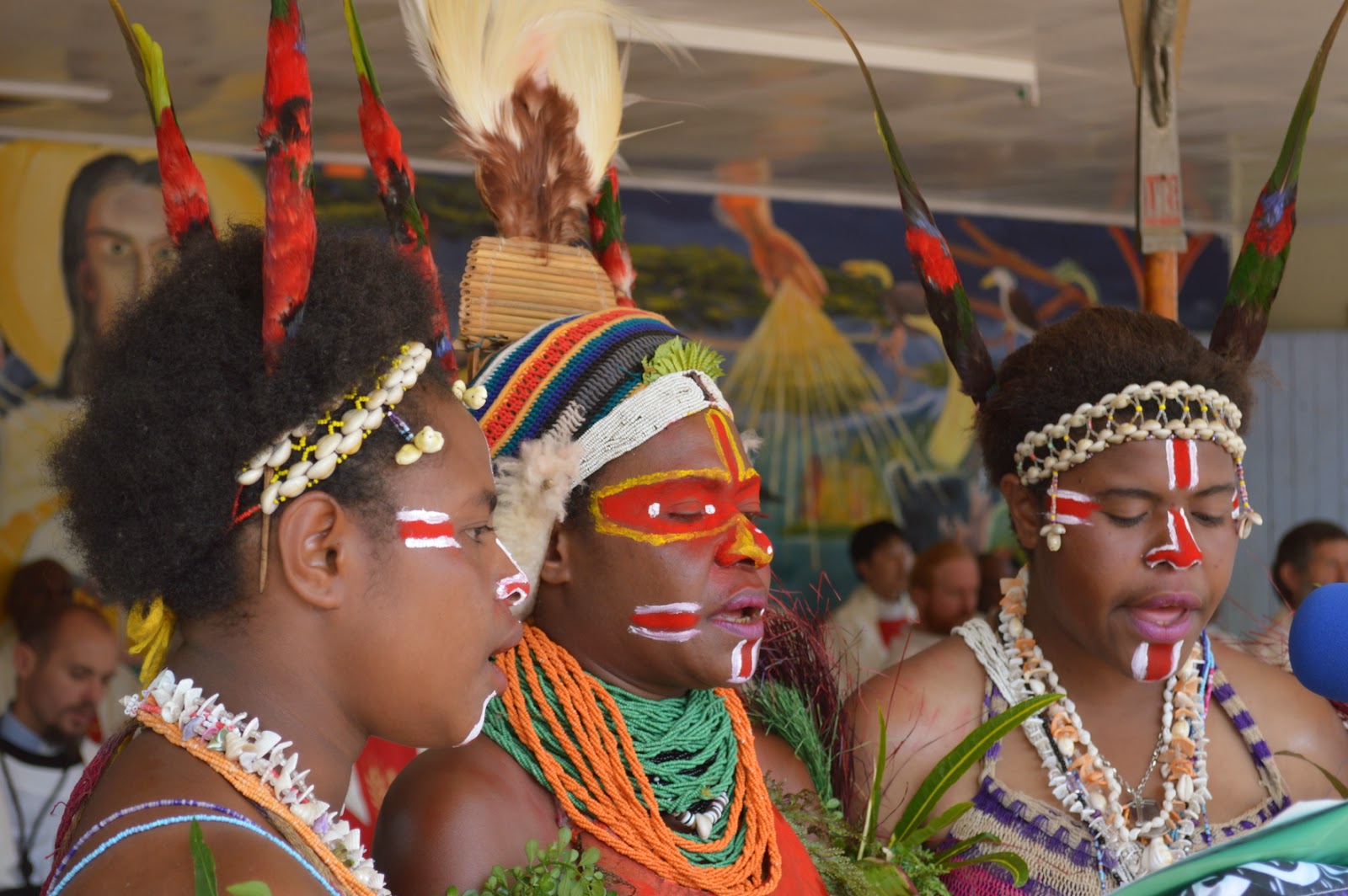 Three young women of the Cathedral Youth Group led the Assembly in the Responsorial Psalm:  "The Lord is my shepherd, there is nothing I shall want." 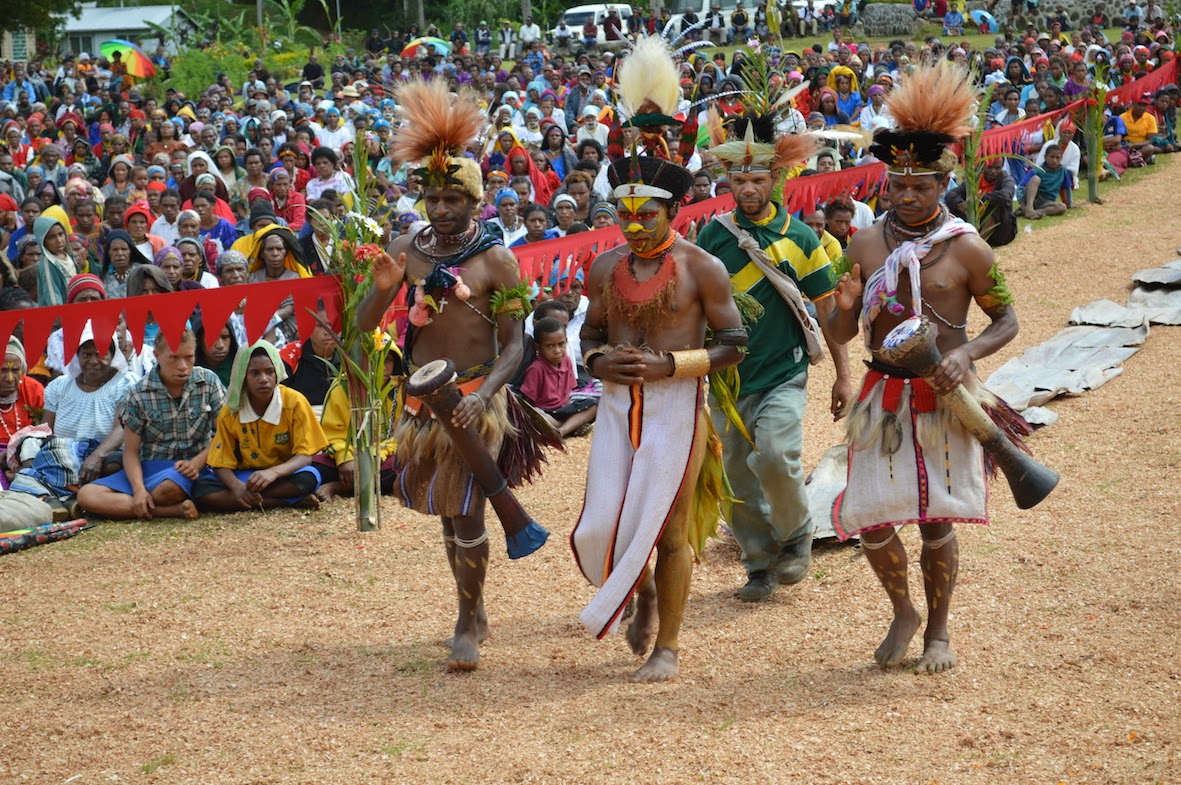 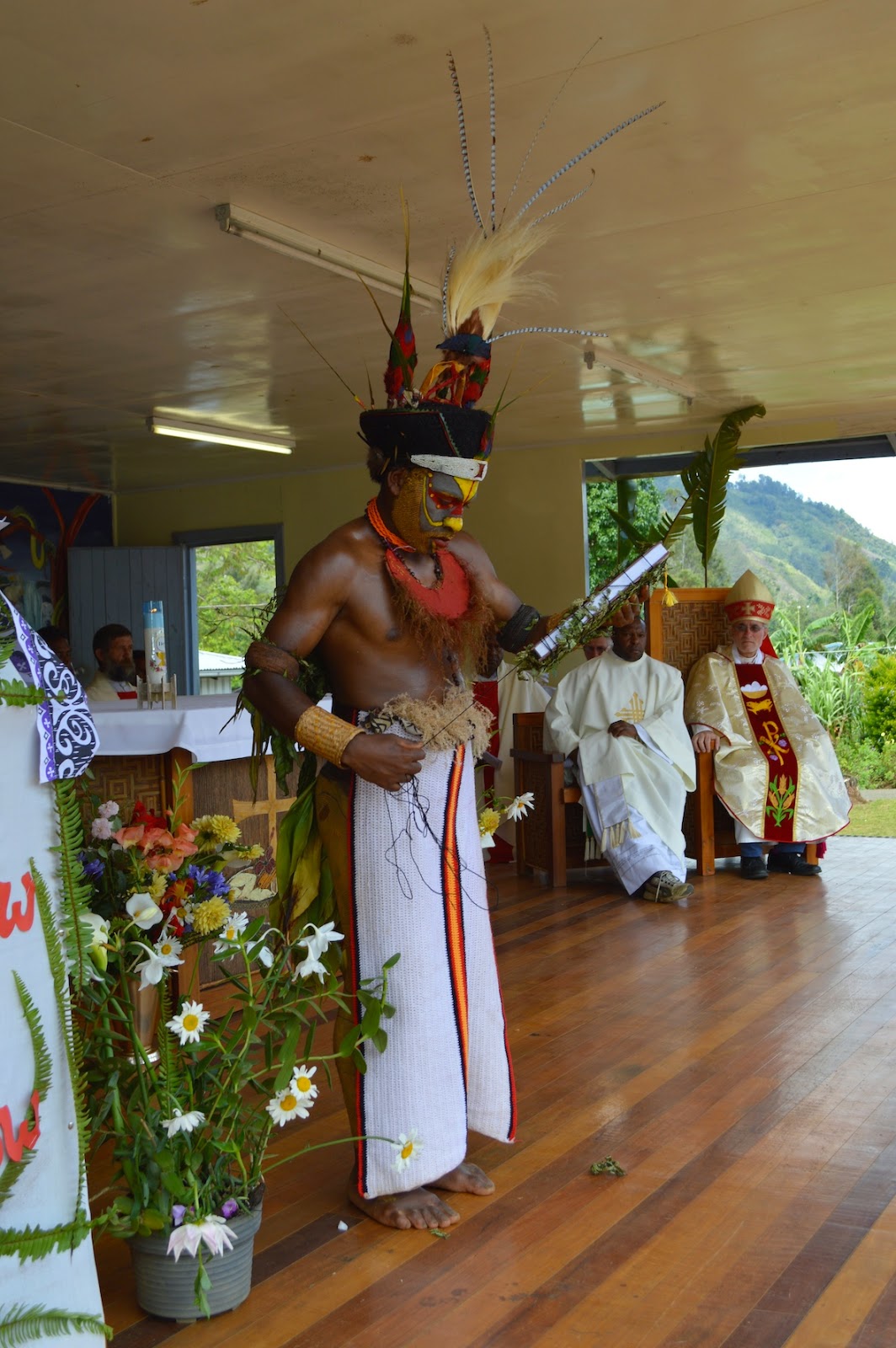 Traditional Drummers come forward for the Gospel Procession.  On the right you can see one of them unwrapping the Gospel.  The Word of God is seen as a precious gift and so the Gospel Book is un-wrapped to show it's importance.  The Deacon then took the Gospel Book to the Ambo where he proclaimed the Good News. 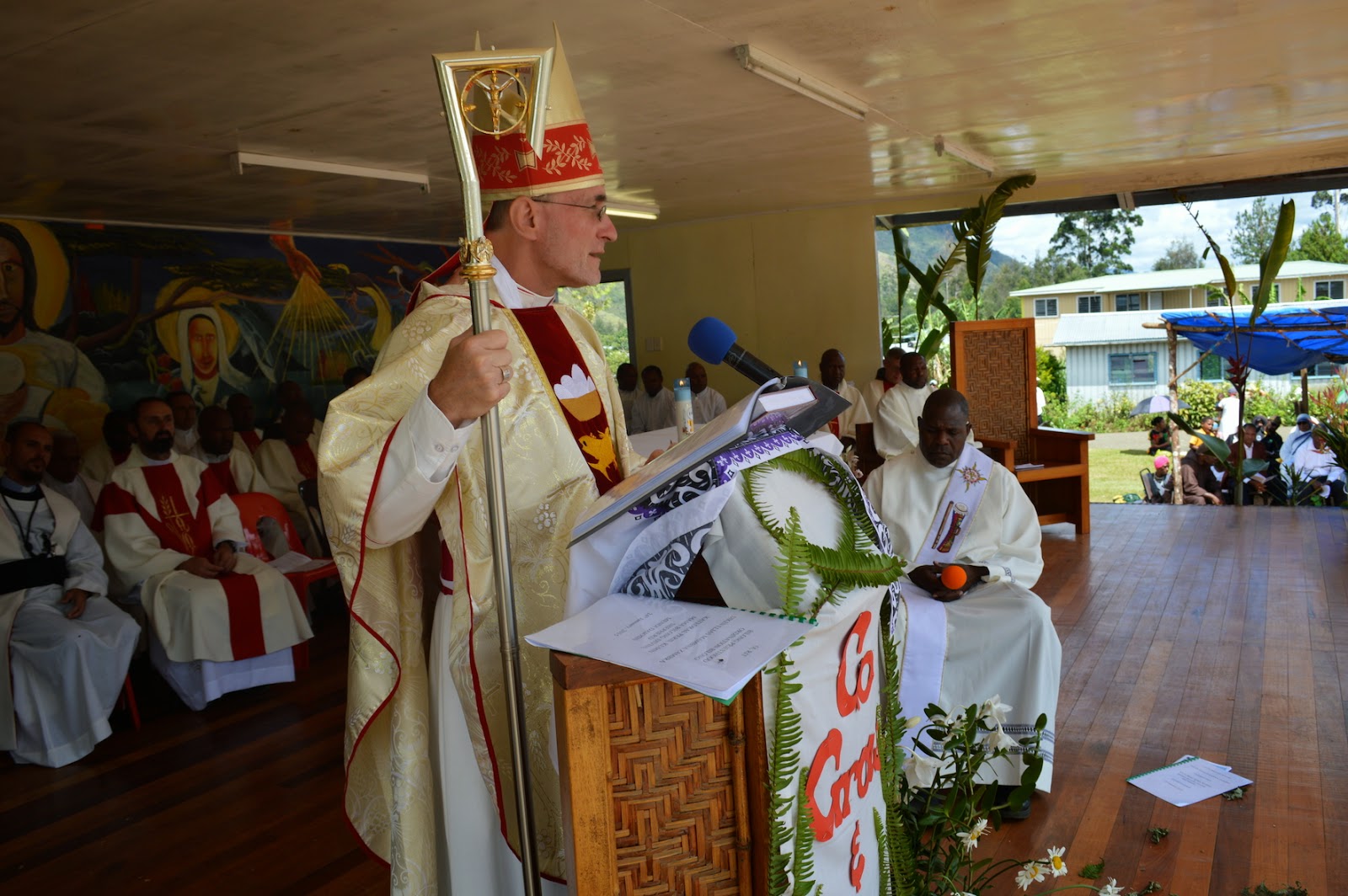 In the homily, which was taken from the Gospel of John 6:1-14, I suggested that the life of a priest must be Eucharistic: taken, blessed, broken and given ... like the life of Jesus. 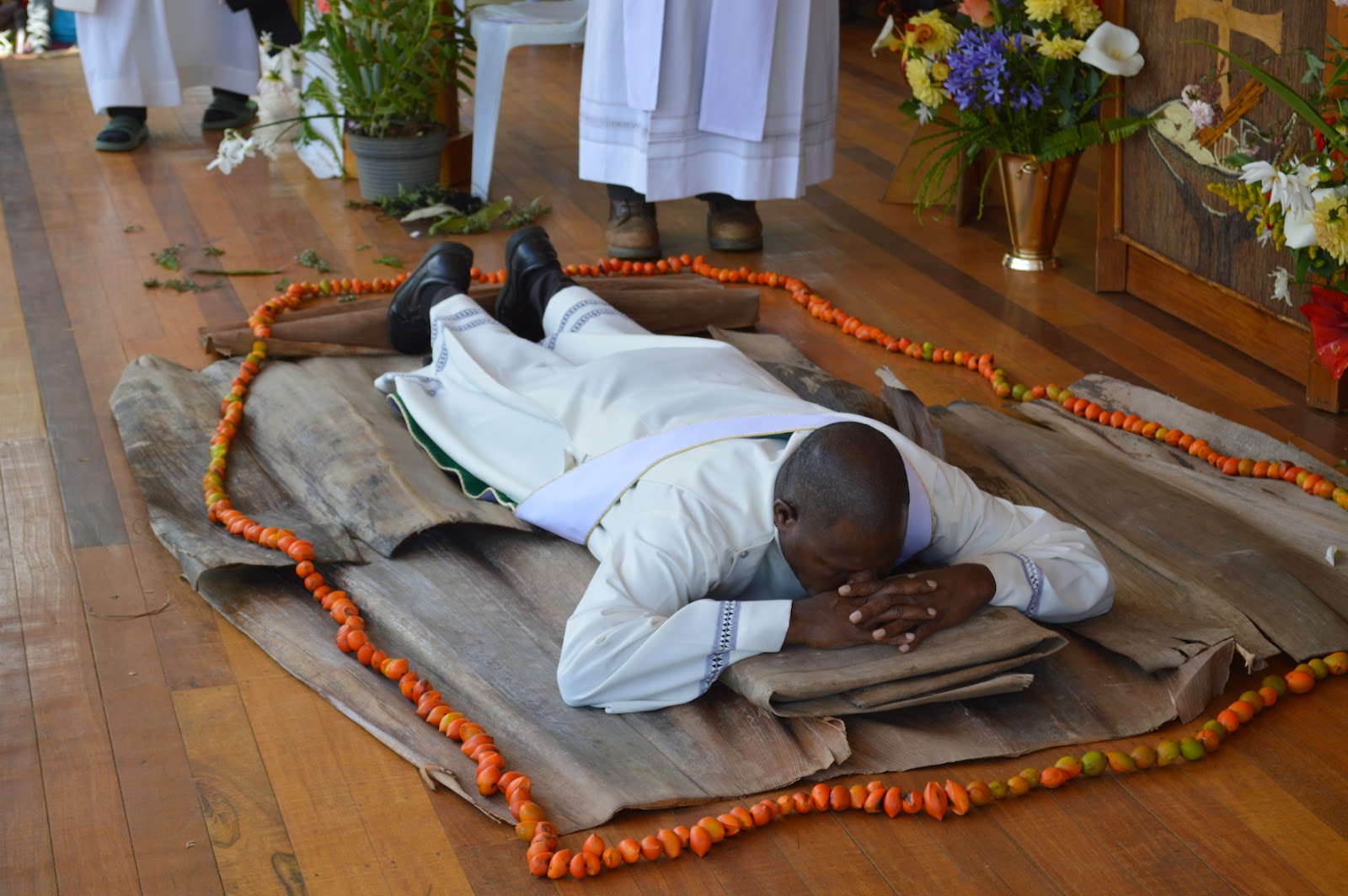 After the homily, all kneel and Deacon Elias prostrates (on a traditional mat) in front of the altar, while 5 Sisters lead the Assembly in the Litany of Saints - a powerful expression of our belief in the Communion of Saints.... "Bless this chosen one and make him holy!" 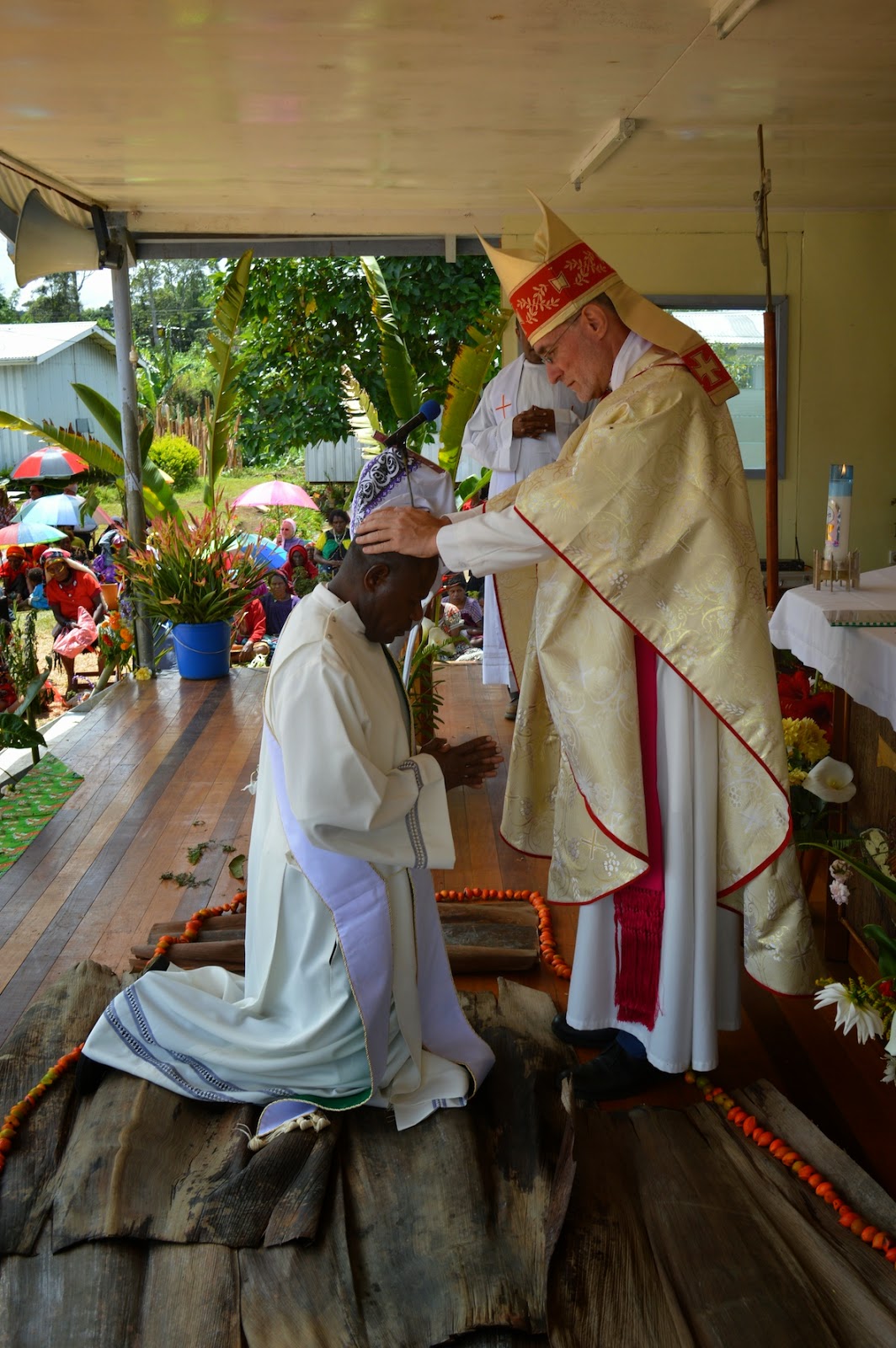 In the ancient, silent gesture of the laying on of hands (and ensuing Prayer of Ordination), Deacon Elias becomes Father Elias - a servant of God's people after the example of Jesus. 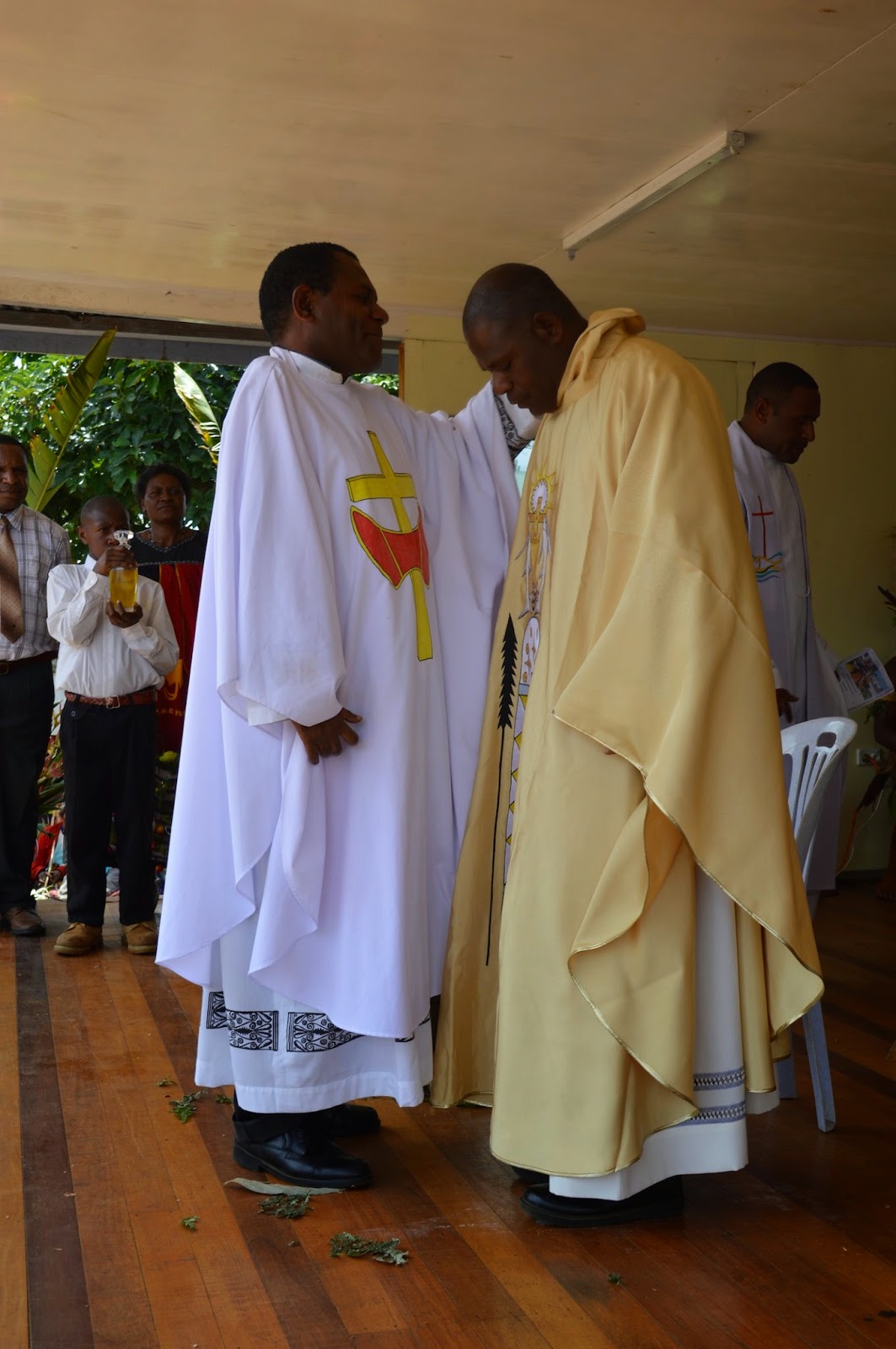 After the Prayer of Ordination, the new priest dons the priestly vestments, the stole and the chasuble, symbols of priestly authority, but more importantly, selfless service. 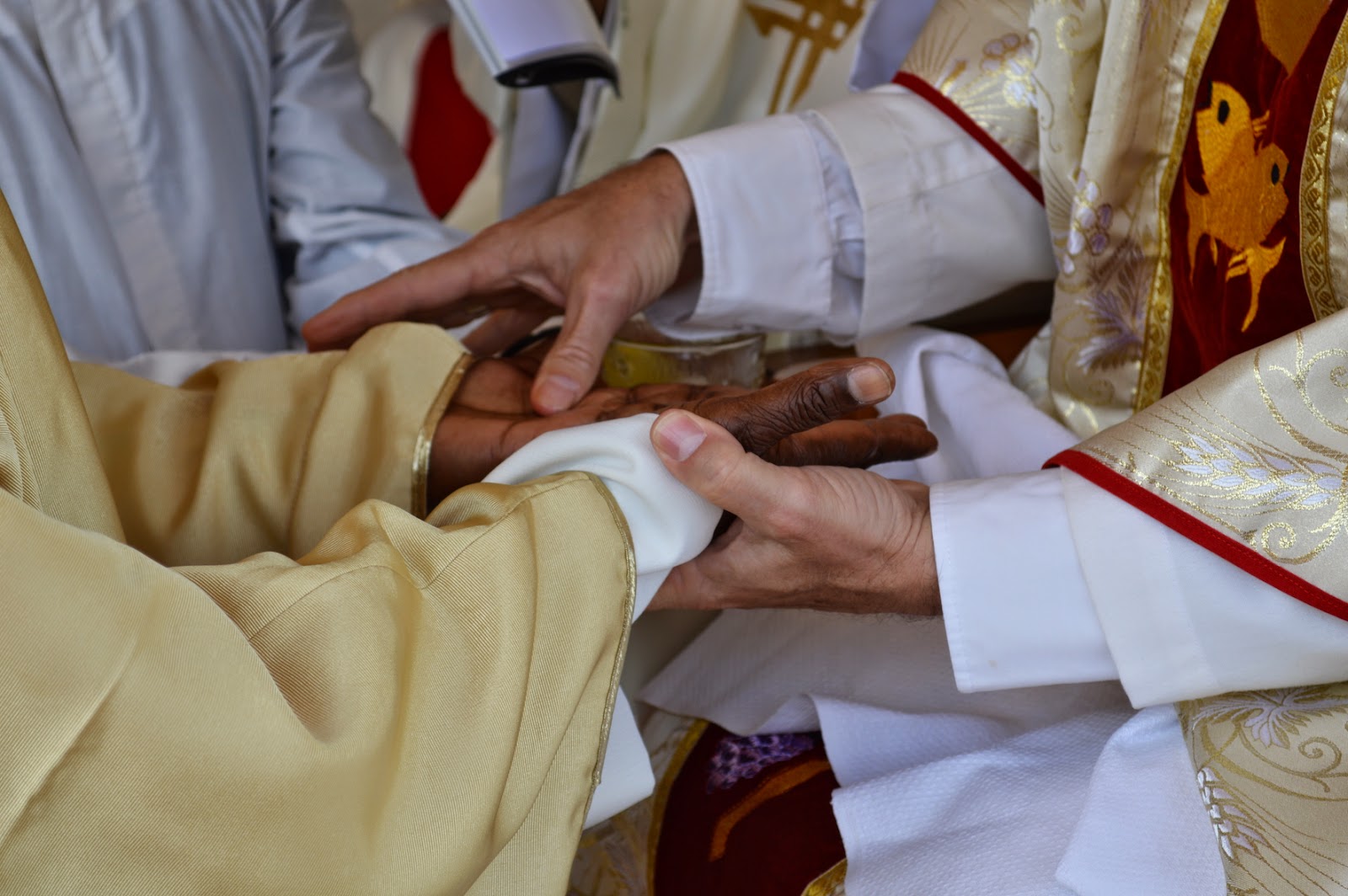 Fr Elias' hands are then anointed with Sacred Chrism that was blessed by the bishop during the Chrism Mass held during Holy Week.  "... that you may sanctify the Christian people and offer sacrifice to God." 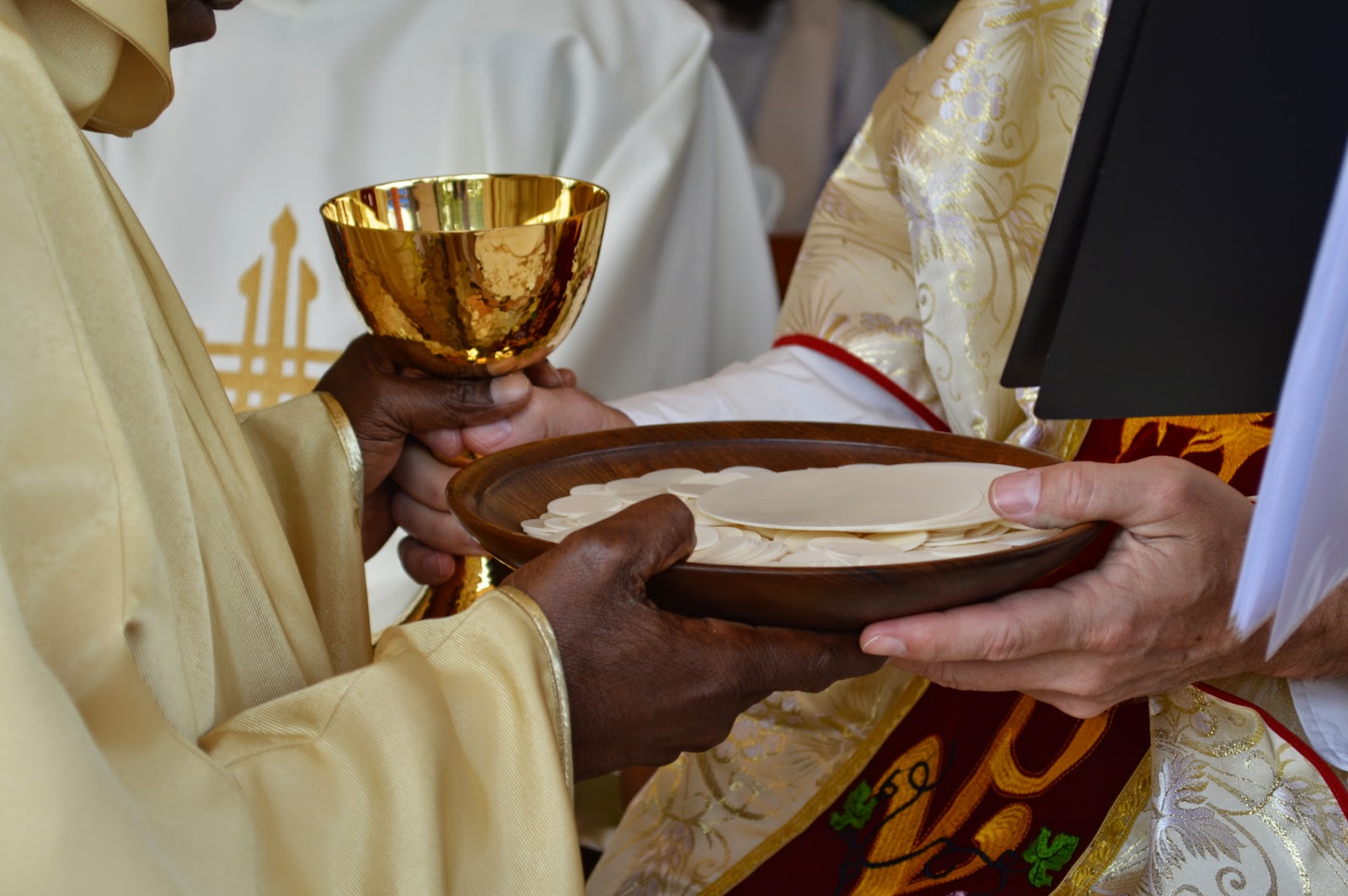 Bread and Wine, the offerings of God's People are then placed in the hands of Father Elias.  "Understand what you do, imitate what you celebrate, and conform your life to the mystery of the Lord's cross." 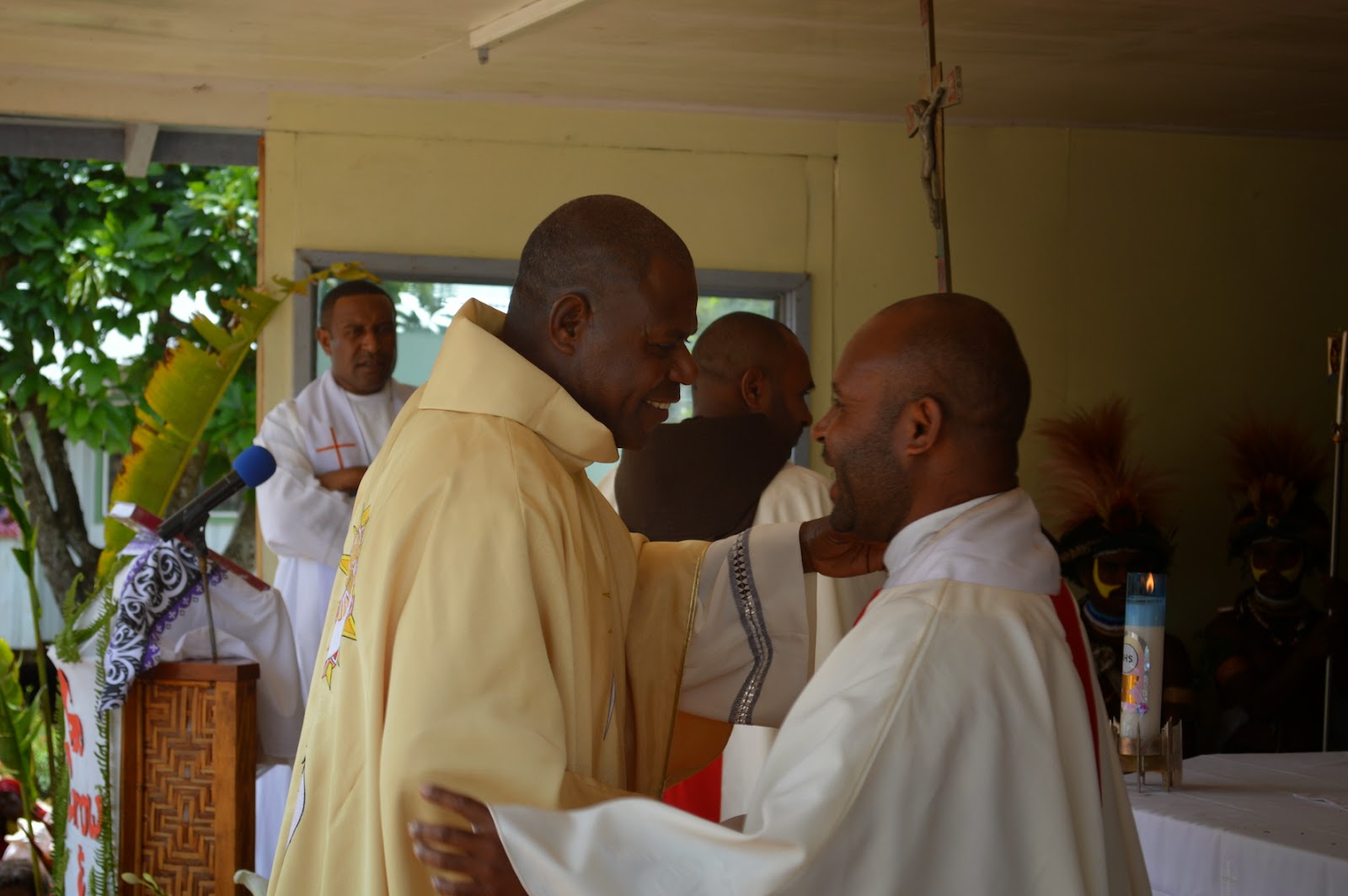 The assembled priests give their new brother the sign of peace, welcoming him to the brotherhood of priests in the Mendi Diocese.  Fraternity among priests is an important part of their vocation, helping them to be faithful ministers of Word and Sacrament among God's People. 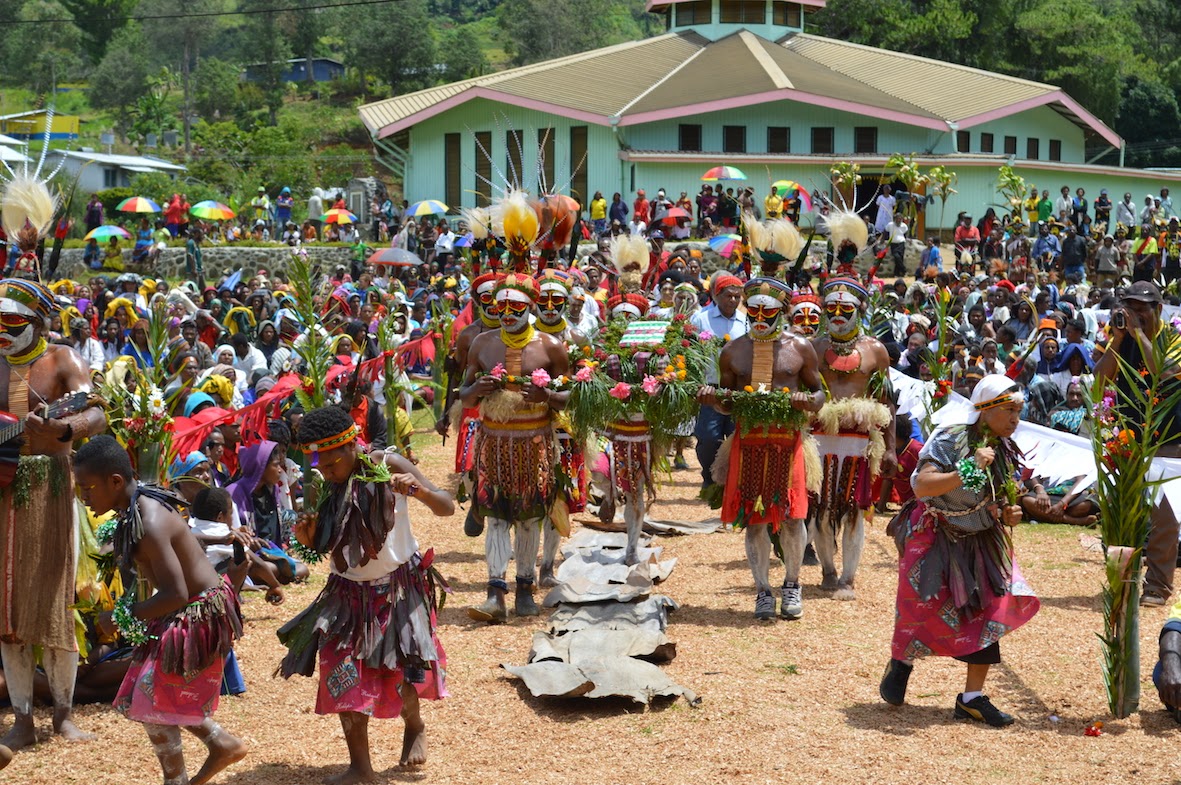 The Presentation of Gifts is a colourful display of culture and faith from the various tribes making up the faithful people of the Diocese of Mendi. 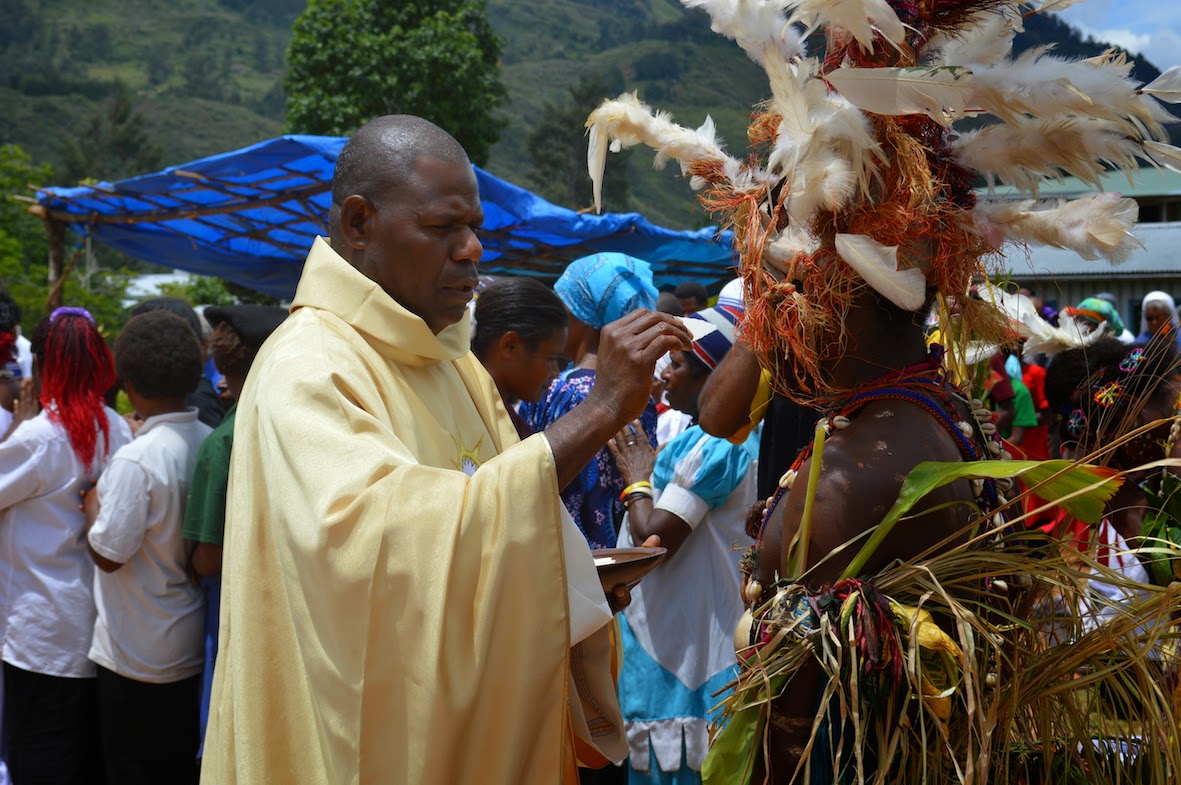 Father Elias distributes Holy Communion to one of his family members (dressed in traditional attire) who participated in the Ordination Liturgy.  A priest is a sign of communion between God and people and an instrument of communion among people everywhere. 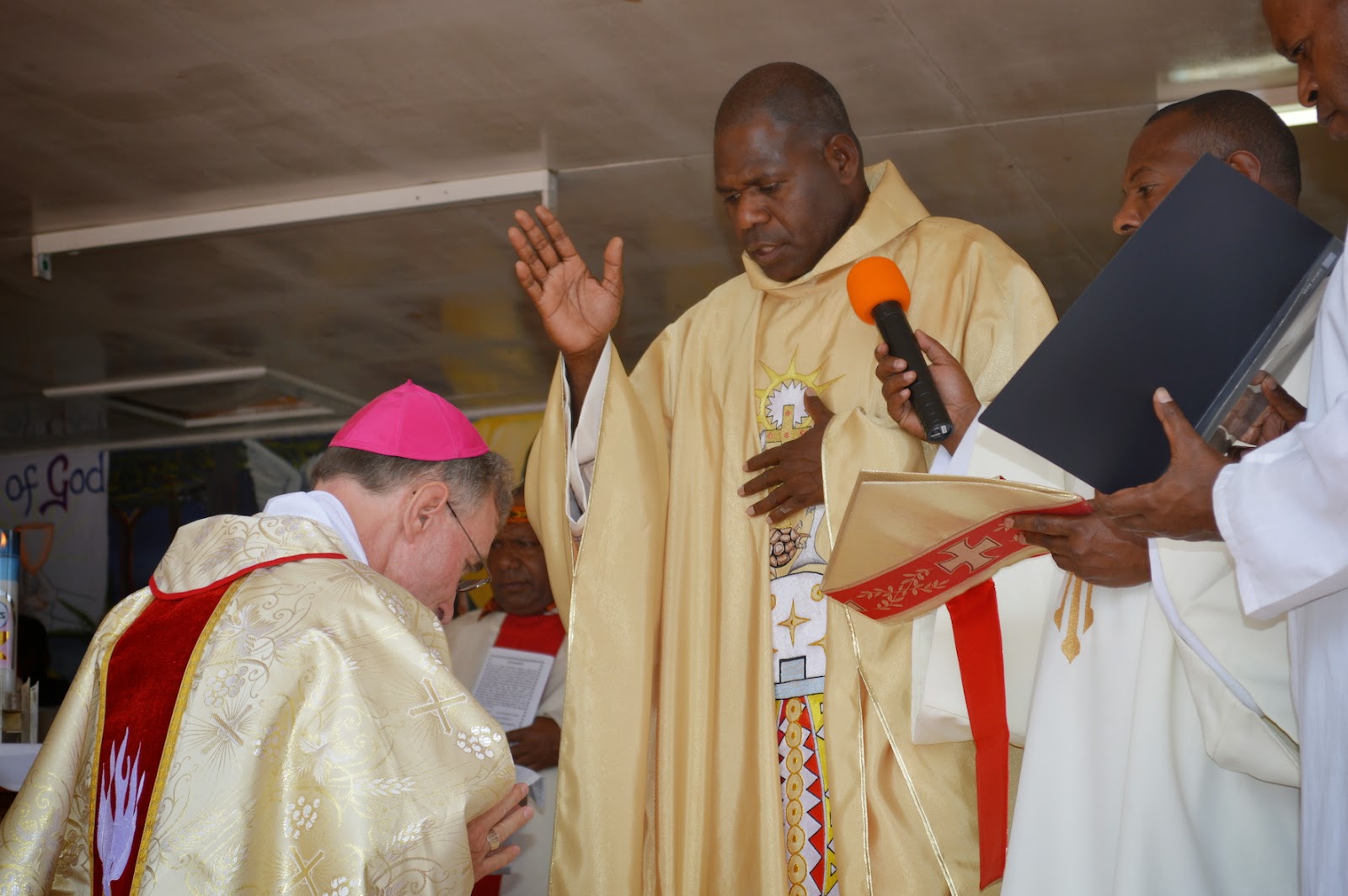 Having given the final blessing of the Ordination Mass, I kneel down and ask for the first blessing of the Fr Elias.  A priest is a blessing for the entire church and so we must always pray for an increase of vocations to the priesthood and consecrated religious life.  We should also pray that those who have been called to this ministry will remain faithful and holy servants of God and God's Holy People. 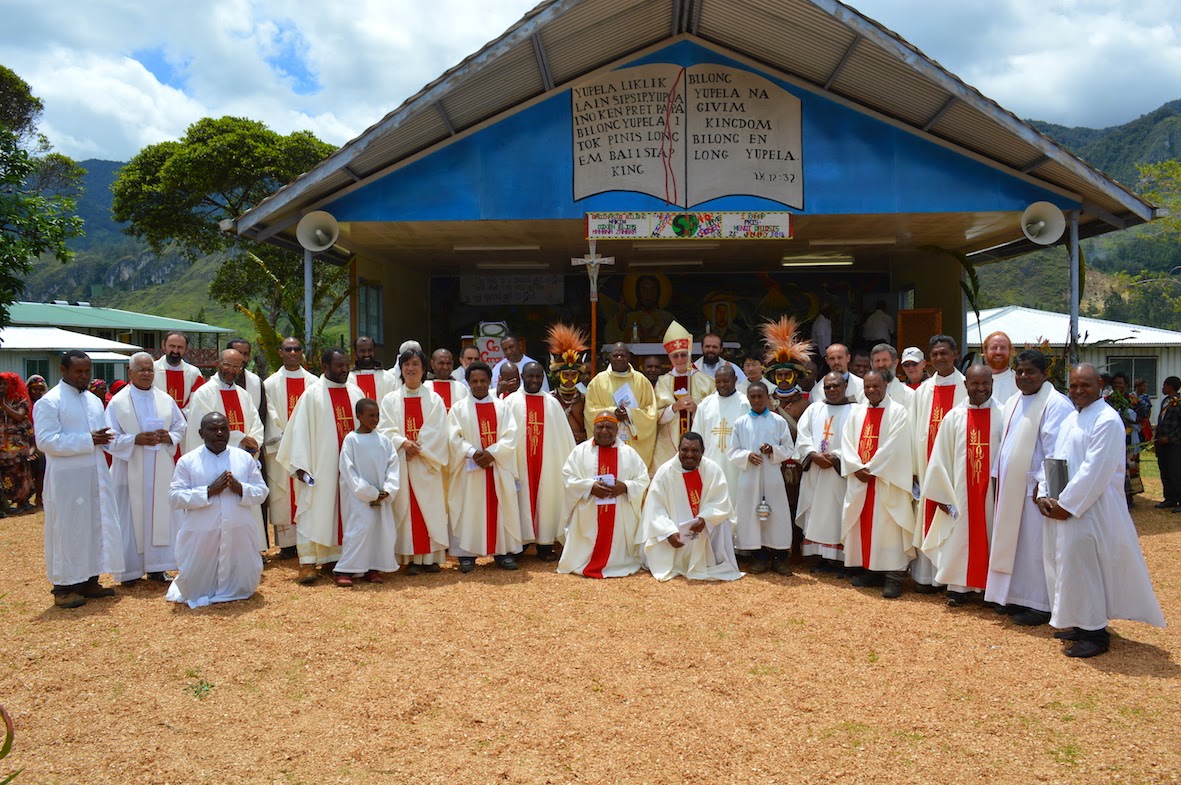 After the Holy Mass, the priests and other ministers pose with the new priest.  The Joy of the Gospel is everywhere evident today. 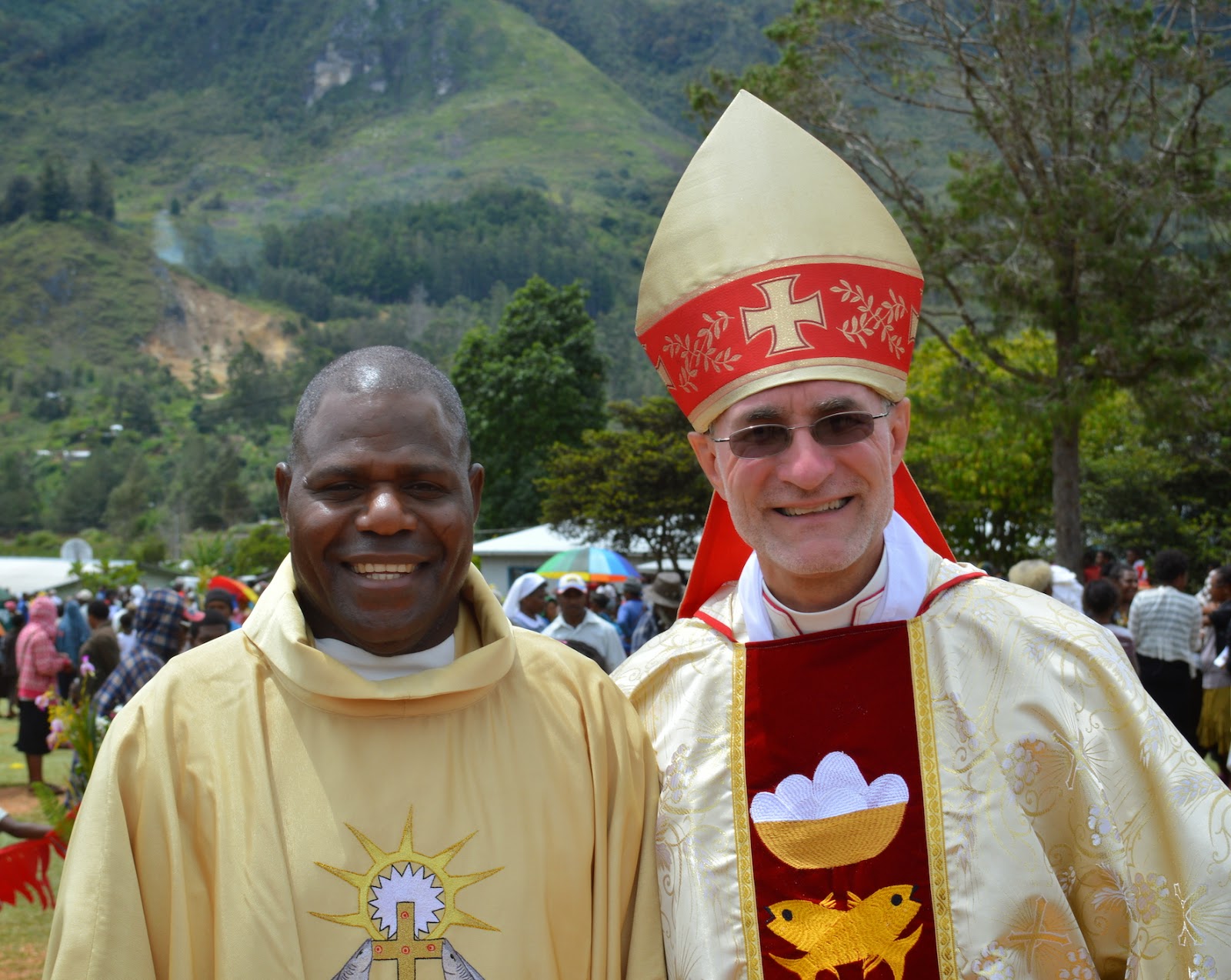 The ordination of a priest is one of the happiest days in the life of a bishop.  God bless the life and ministry of Father Elias. 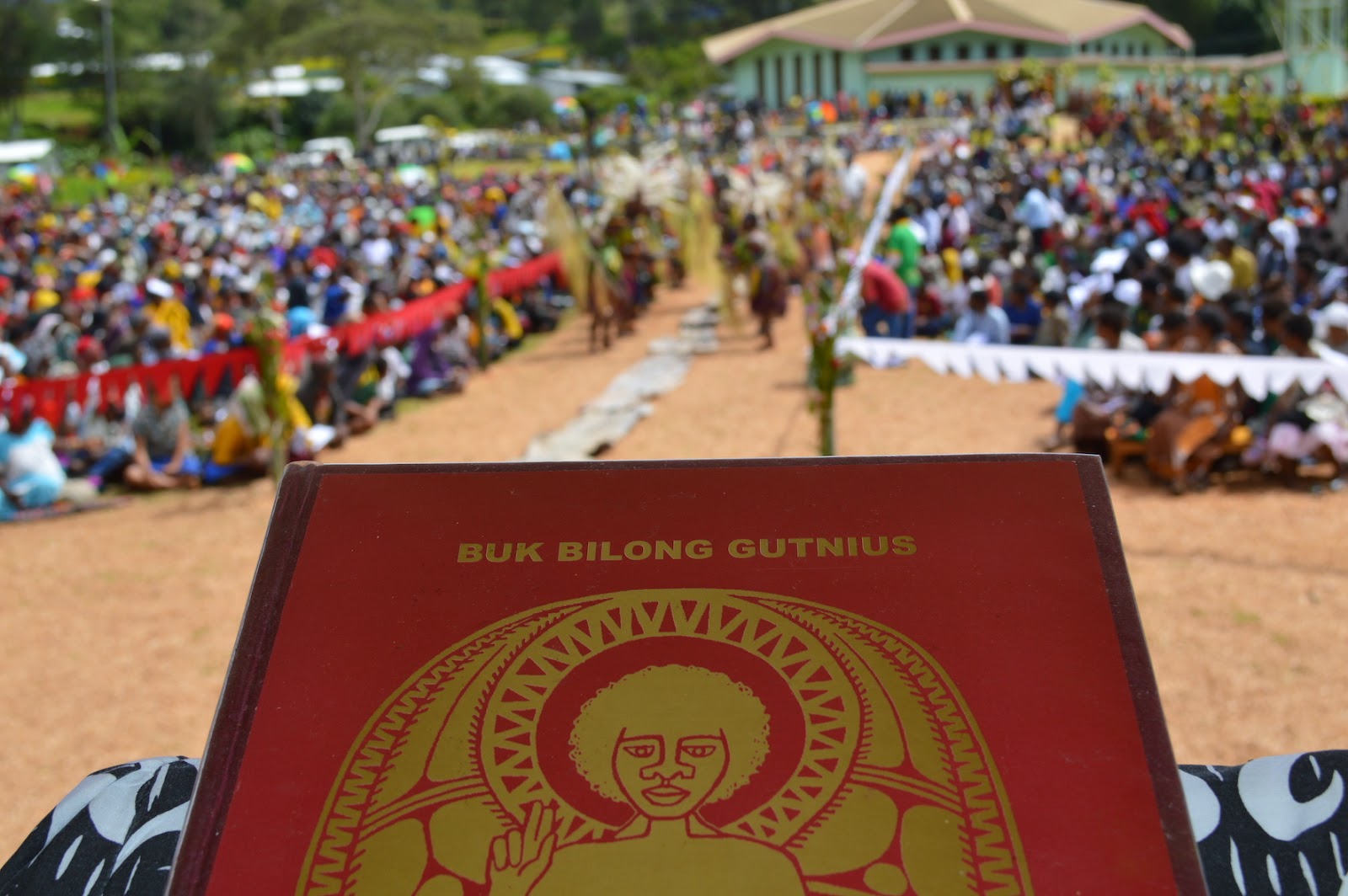 Thank you for following along this story of the ordination of Father Elias.  And thanks to AK Gleske for taking such beautiful photos of the occasion.  See you soon!
Posted by Unknown at 5:24 PM