No it's not a bush fire - or at least the kind you may be thinking.  The Legion of Mary is celebrating it's Silver Jubilee in the Diocese of Mendi, Papua New Guinea (PNG).  It is a five day celebration, filled with prayer, fellowship, formation and fun!  Today, they celebrated a traditional meal called 'mumu'.  I would like to take you through the steps of this customary way of preparing this special meal. 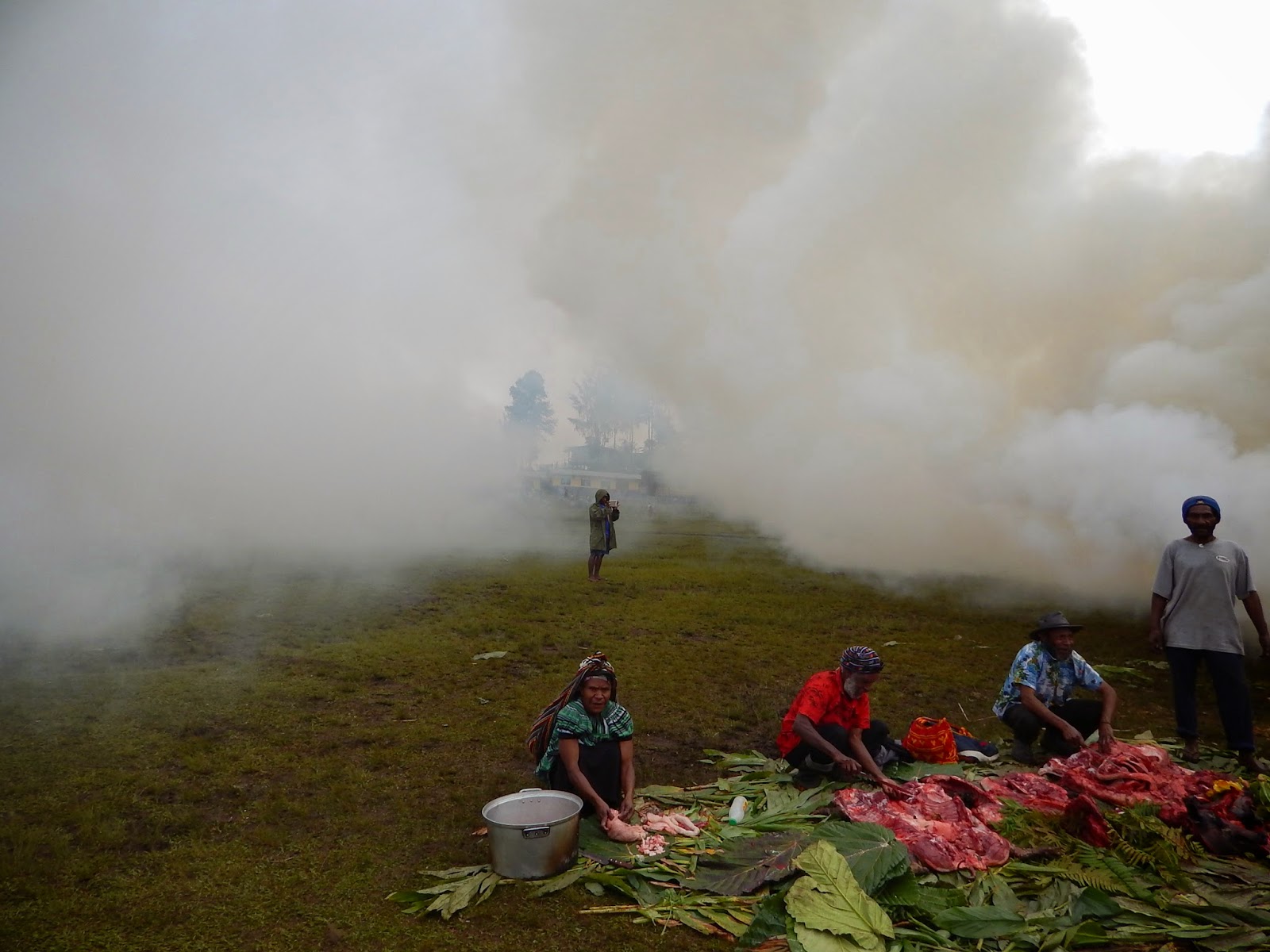 The main dish is pork.  Pigs represent an important part of the cultures of PNG.  They are a sign of wealth and status.  The pigs used in today's mumu were humanely slaughtered in the early hours of the morning, when some of the other preparations were being made.

Firewood has to be cut and split (by hand) and gathered.  The mumu pit has to be dug (by hand).  Everyone has a part to play. 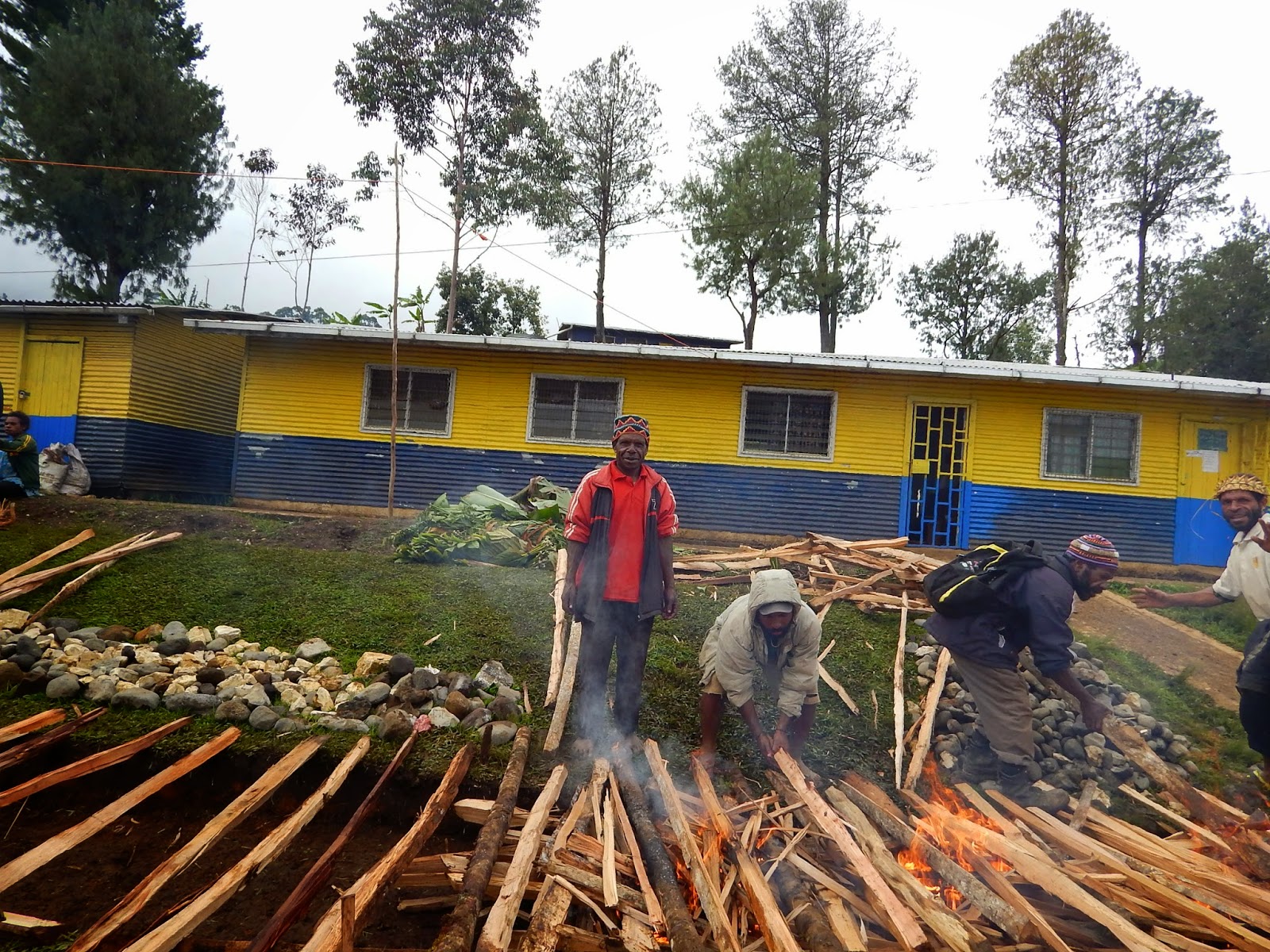 The mumu pit is dug and the firewood is positioned as in the above photo.  The wood is often taken from a kind of bush tree that burns even when a bit wet!  That's a good thing in the Southern Highlands where it rains every day! 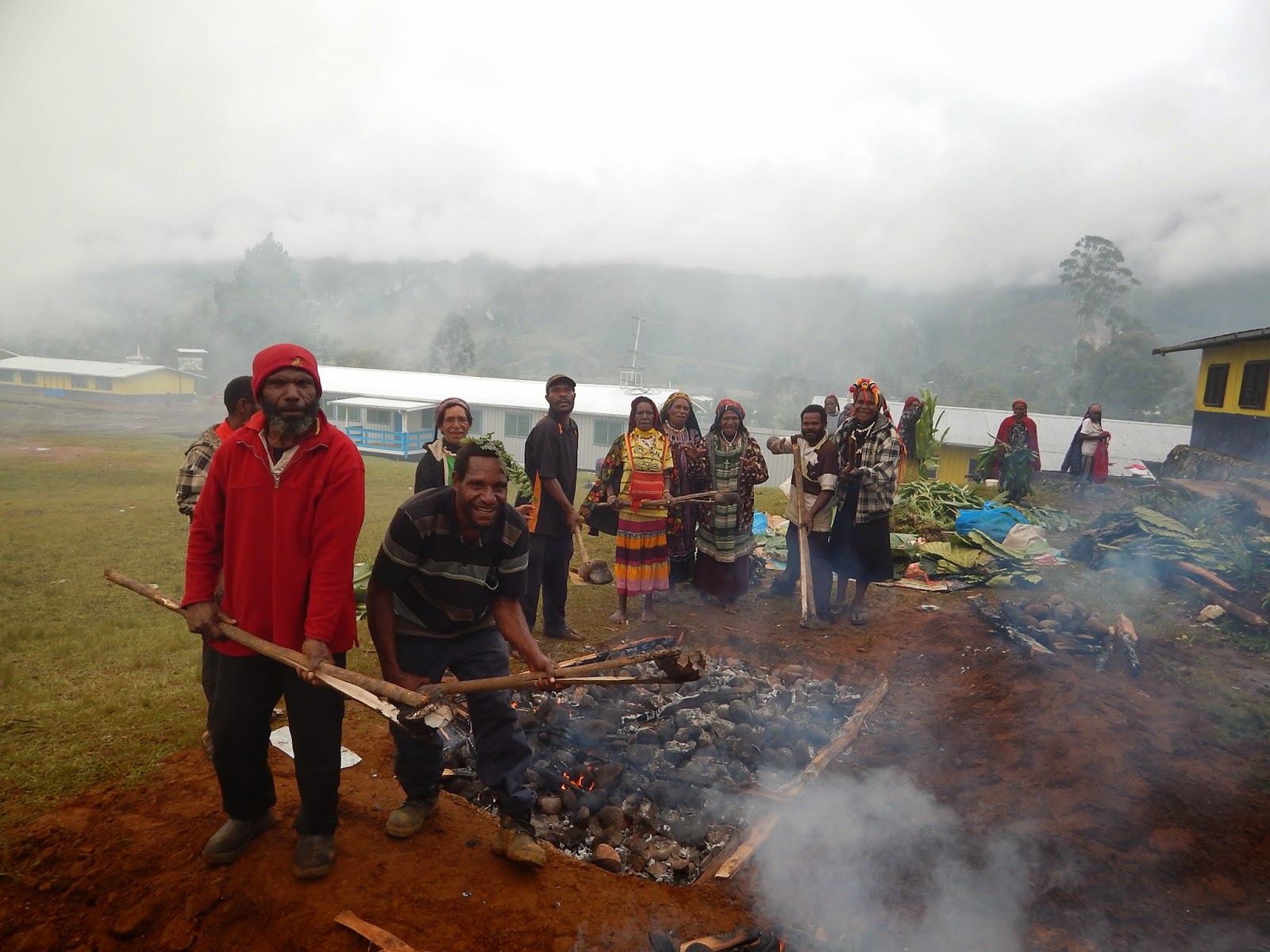 When the fire is raging, river stones are placed in the fire.  These stones are the key to the whole process.  The stones will hold the heat and cook the pork and assorted greens and vegetables that are cooked in the juices! 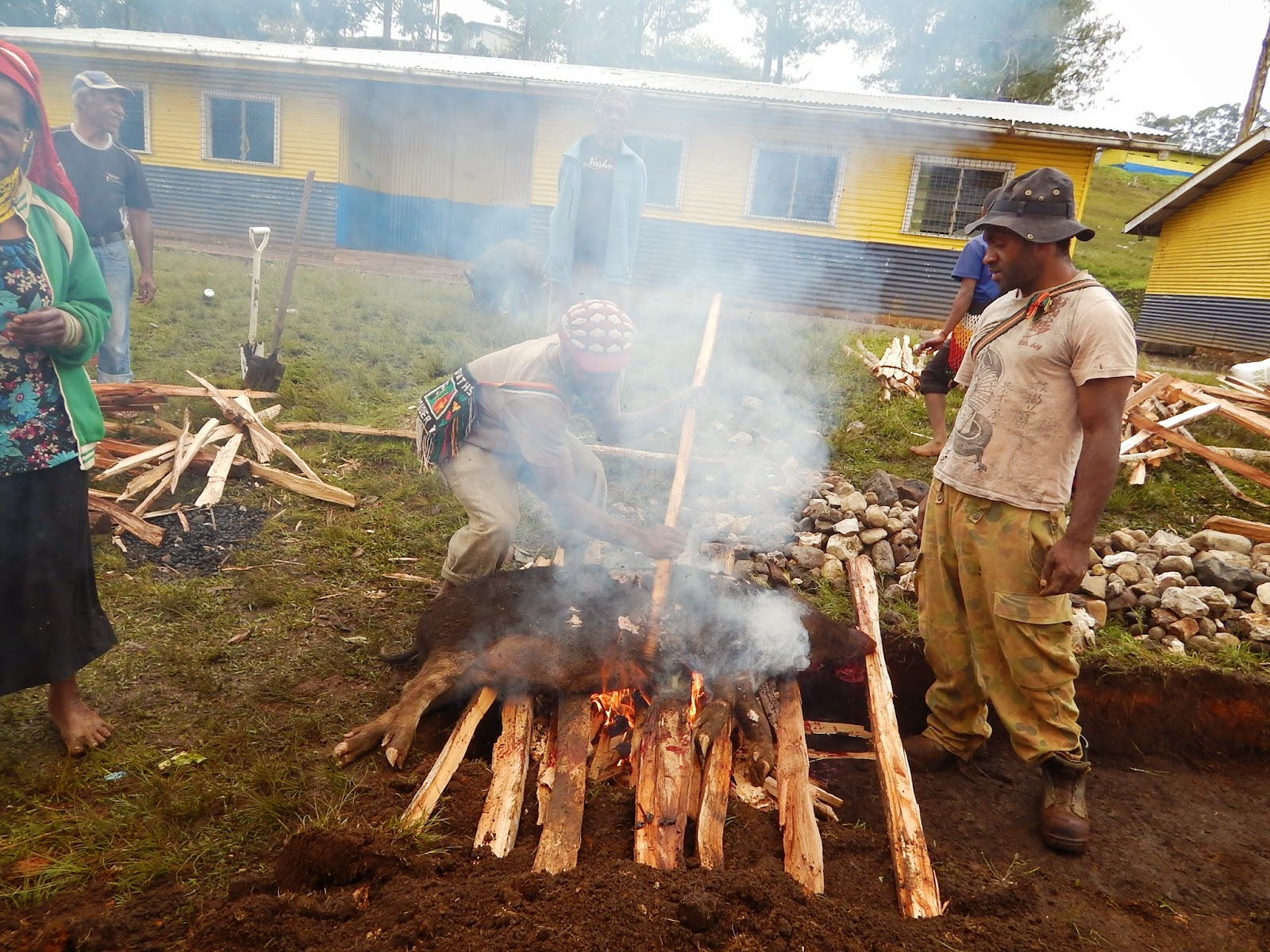 Before the pigs are 'operated on', that is, cut up and readied for cooking.  The hair of the (dead) pig is removed as shown above. 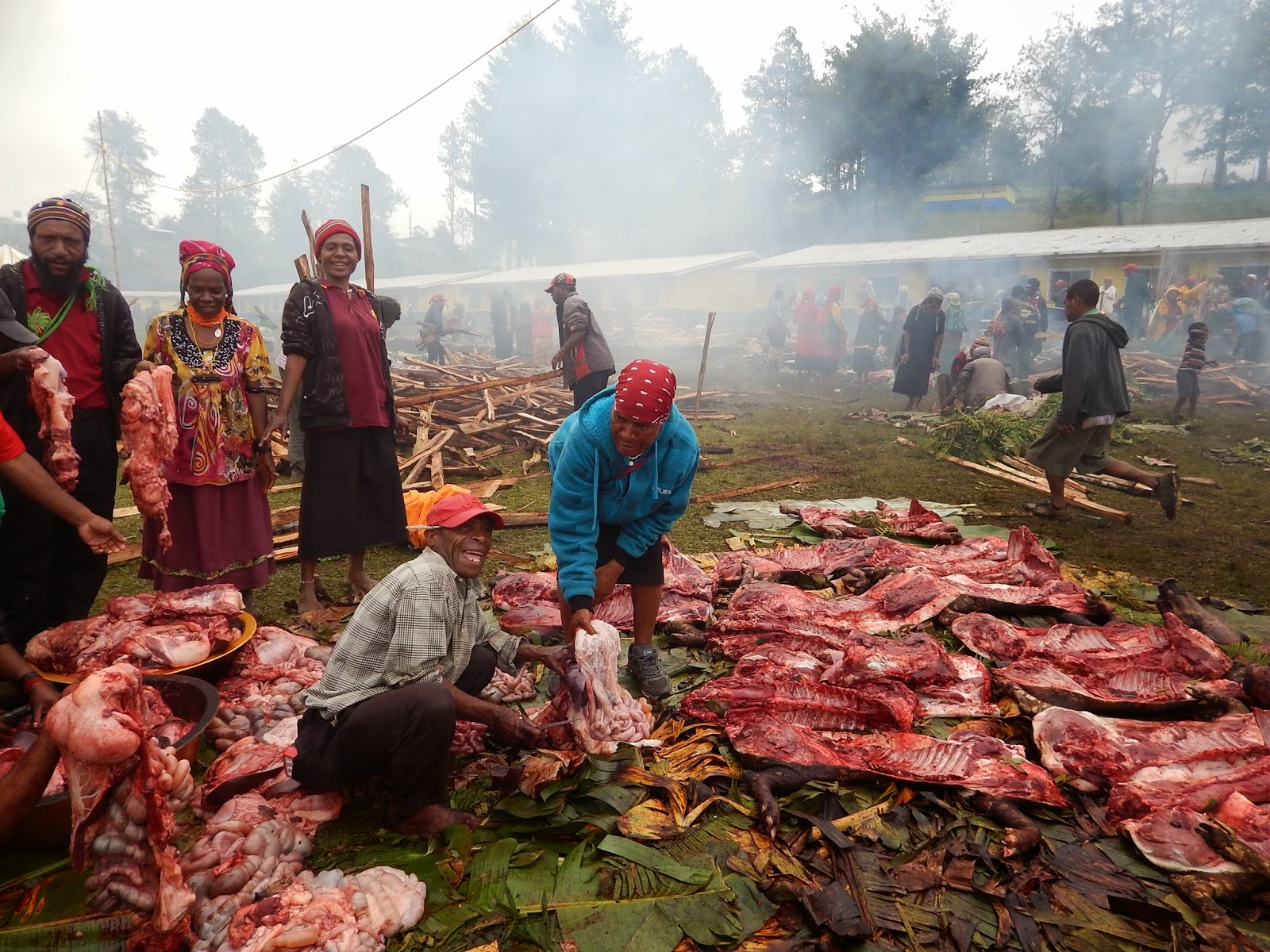 Many pigs were used in this mumu.  Each culture in PNG has their own particular way of cutting up and preparing the meat for the mumu.  The atmosphere is festive.  This doesn't happen every day!  Some of the meat will be shared and eaten at the celebration today.  Some of the meat is given to people who have contributed to the celebration or others in exchange as a way of strengthening bonds of interdependence.  There is importance attached to the various cuts of meat.  Certain cuts would only go to very important people... other cuts to people in more horizontal relationships.  Needless to say, nothing is wasted! 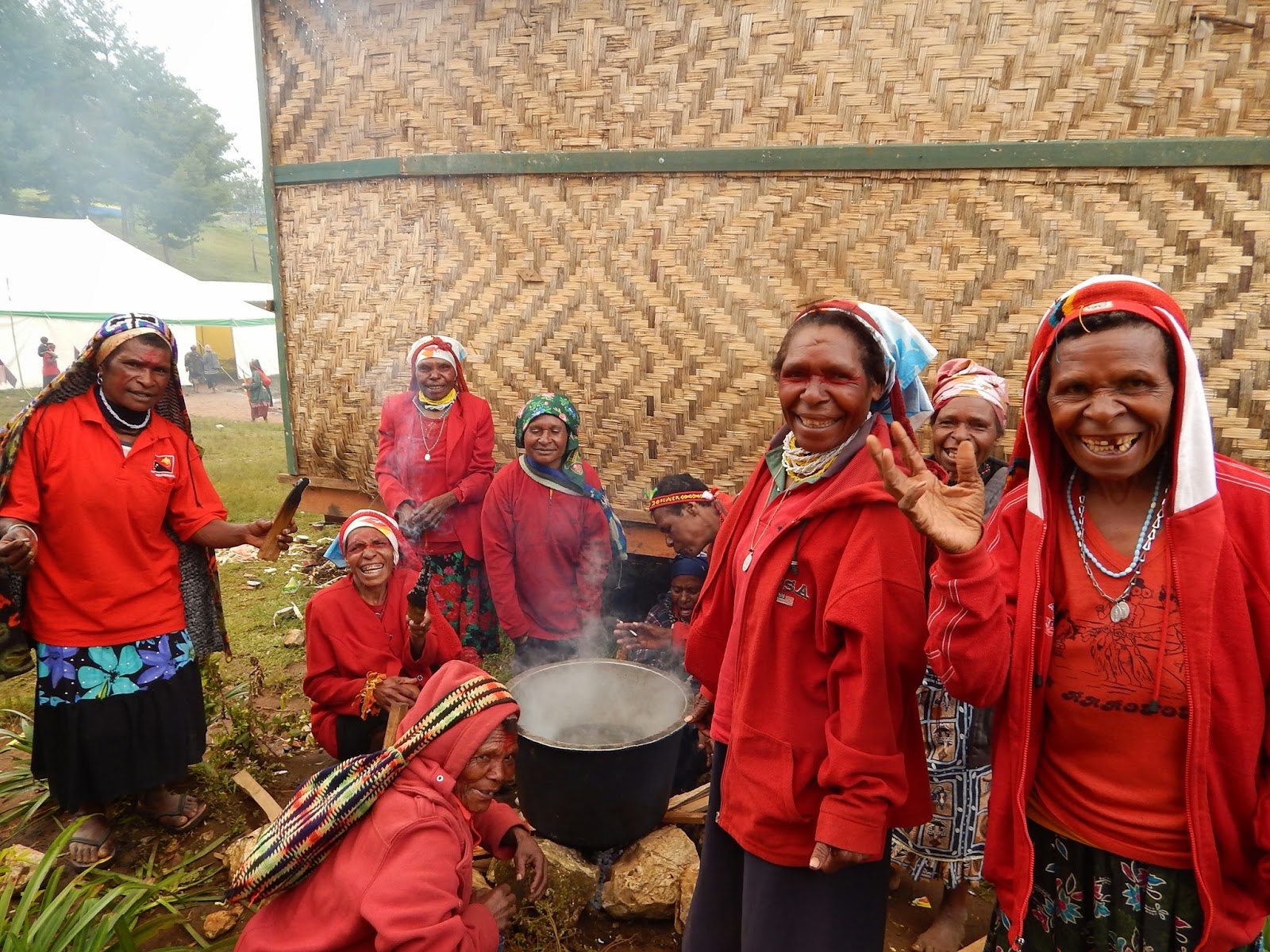 Some parts of the pig are prepared by boiling.  Everyone gets in on the act. 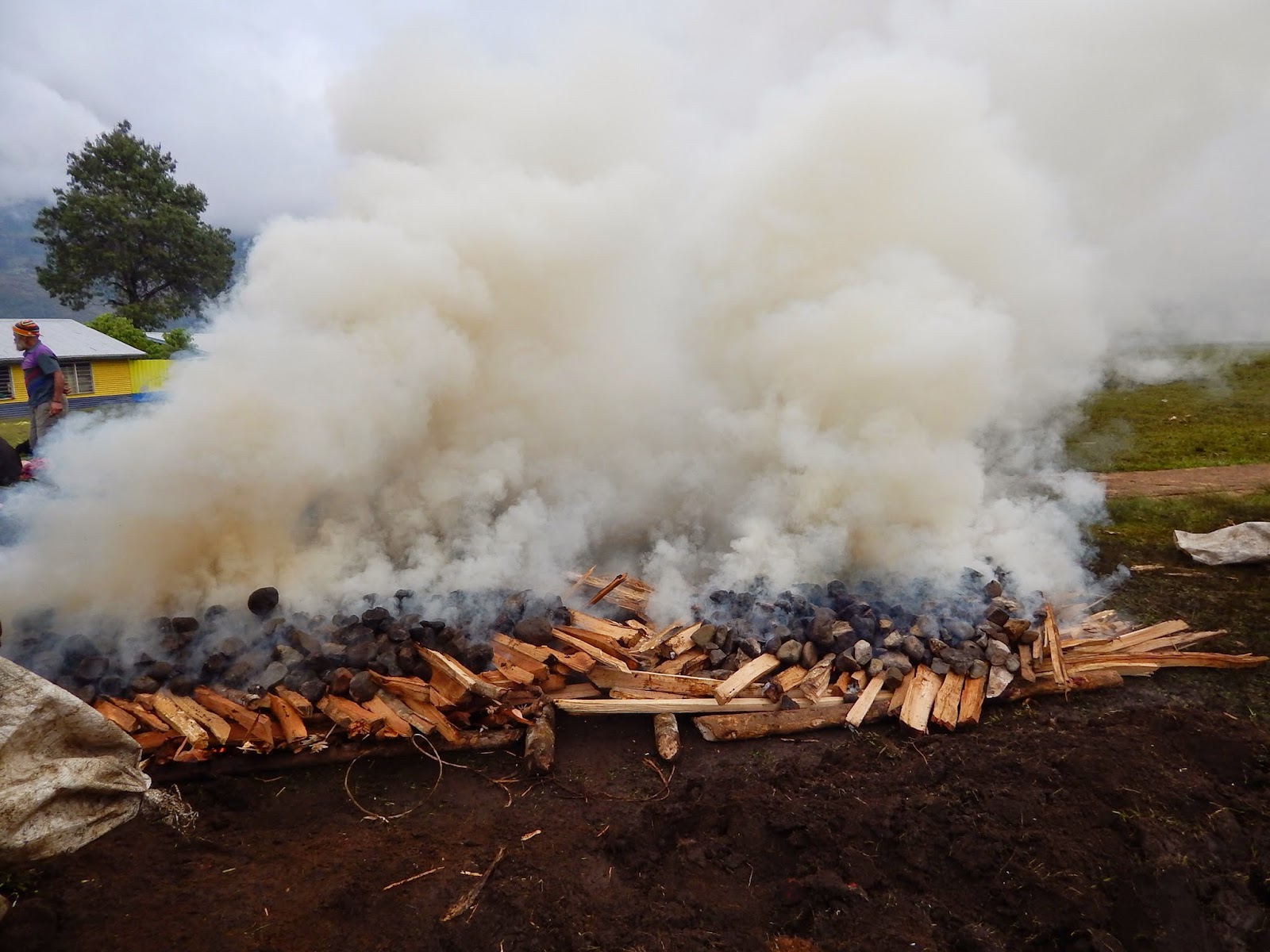 After the stones are heated and the firewood is consumed, the meat, greens and vegetables are placed in the pit... and the whole thing is covered with earth and banana leaves and is allowed to cook in this earthen oven for several hours.  The stones hold the heat so well, that even if it rains, the food is still cooked to perfection.

I can speak from experience ... It's finger-licking good!

Happy Silver Jubilee to the Legion of Mary in the Diocese of Mendi, Papua New Guinea.
Posted by Unknown at 8:10 PM