Just got back from a ‘patrol’ through the Western Deanery of the Diocese of Mendi, which is made up of the Hela Province.  The predominant tribal group there are the Huli’s.  They are a strong and faithful people who are proud of their cultural heritage.  I would invite you to walk with me through the various steps of this journey… The limits and expense of our IT capabilities prevents me from sharing all of the pictures that I would like to… but I hope that the few that I am able to upload will give you a sense of our trip.  I was accompanined on this journey by Deacon Elias Zambra and lay missionary Anne Katrin Gleske from Germany.

We set out from Mendi for the five hour roadtrip to Tari.  In Tari we joined in the celebration of the 60th Anniversary of the first Holy Mass ever celebrated in the Tari side  of the diocese.  The first Mass was celebrated by Fr. Michelot, MSC who had come from the coast to explore the possibility of establishing the Church in the Highlands.  He was surprised to discover that there were large populations of people living in the Highlands and he determined that the Missionaries of the Sacred Heart (MSC) would not be able to take on the additional mission.  It was then, after less than two years after the first Mass, that the mission of the Southern Highlands was entrusted to the Capuchin-Franciscan Friars of the Saint Augustine Province, Pittsburgh, PA  USA.  The Capuchins have been in Tari ever since.  They have served tirelessly for almost 60 years in the Southern Highlands and now in the Hela Province to announce the Good News of Jesus.

We then set out for Saint Joseph Tari Secondary School (TSS) to celebrate the Sacrament of Confirmation.  The faculty and students warmly welcomed us and participated in a Spirit-filled liturgy. Mr Clive Yemini is the principal.  The FCC Sisters (Sr. Jasmine and Sr Sophy) also serve at the school.  The Mass was celebrated on Saint Francis Day, which provided an extra layer of joy and meaning to the celebration.

After Tari Secondary School we headed to Saint Conrad Parish in Pureni for the Sacrament of Confirmation.  Parish is also served by the Capuchin Franciscans of the Custody of PNG/SI.  We were privileged to have Father Jonathan Williams, OFM Cap., Custodian of the Capuchins present for the celebration.  At the Mass, Fr Jonathan proposed Capuchin Fr. Maneesh Mathew, OFM Cap., to serve as as the new parish priest and I, as bishop joyfully appointed him to that very important ministry.  The people were very happy with the appointment.

After Pureni we took the road toward Hungi, which is a pastoral area served by the Capuchins.  At present there is not a full-time priest assigned, but Father Paul Patlo, OFM Cap., is looking after the pastoral area until a full-time priest will be assigned there.  We went to celebrate the Sacrament of Confirmation at a mountaintop outstation named after PNG’s own Blessed Peter ToRot – and at the Hungi mainstation named after Saint Anthony.  We arrived and were greeted by an enthusiastic group of parishioners who had gathered.  We celebrated Holy Mass with the people and then had a peaceful evening.

Early the next morning we were off on foot (though wings would have been more appropriate) as we climbed the mountain bushtrack to Timugu.  The climb was VERY steep and a bit strenuous for those of us who were not used to it.  However, the  local people ascended with ease.  I was amazed to see people of every age making the climb appear to be a ‘walk in the park’.  I needed to stop a few times to catch my breath – but my companions were very understanding.  At Timugu we also celebrated the Sacrament of Confirmation with the young people.

I was touched by our trip to Hungi and Timugu.  In each place the leaders pleaded with me to help them.  There are no schools in the area and no adequate health care.  The government has forgotten them.  Here, the people speak only Huli, their Mother-tongue.  They have no way of learning Pidgin ... and so, my homily and any words that I speak to them must be translated into Huli by the catechist. Pray that I can work with the 'powers that be' to help bring needed services to these wonderful people.

After the Confirmation, and a traditional meal (mumu) we began our descent again toward Hungi.  I was thankful that the rain held off until the end of the journey.  The path would have been treacherous for us trying to deal with running water and mud!  There were faithful guides to help us every step of the way.

After a good night's rest, we got up and prepared for the Sacrament of Confirmation with the people of the main station at Hungi.

As you can see from this trip, an important part of the ministry of a bishop is celebrating the Sacrament of Confirmation with the young people of the diocese.  I have to confess, it is among the most enjoyable things that I do.  It has also given me the opportunity to reflect more on the profound work of the Holy Spirit who continues building up the Church in every age with a marvellous outpouring of gifts and charisms.

After the Holy Mass we packed up the car and hit the dusty and bumpy road toward Hedmari... where once again, we were greeted by the enthusiastic parishioners.

Fr Joice Packel, CST is the parish priest of the Hedmari Pastoral Area.  He is from Kerala, India.  He belongs to the Congregation of Saint Therese.  We were invited to come and bless a new grotto of the Blessed Virgin Mary which the parishioners had built.  The devotion to ‘Mama Maria’ among the Catholics in Papua New Guinea is very strong and inspiring. 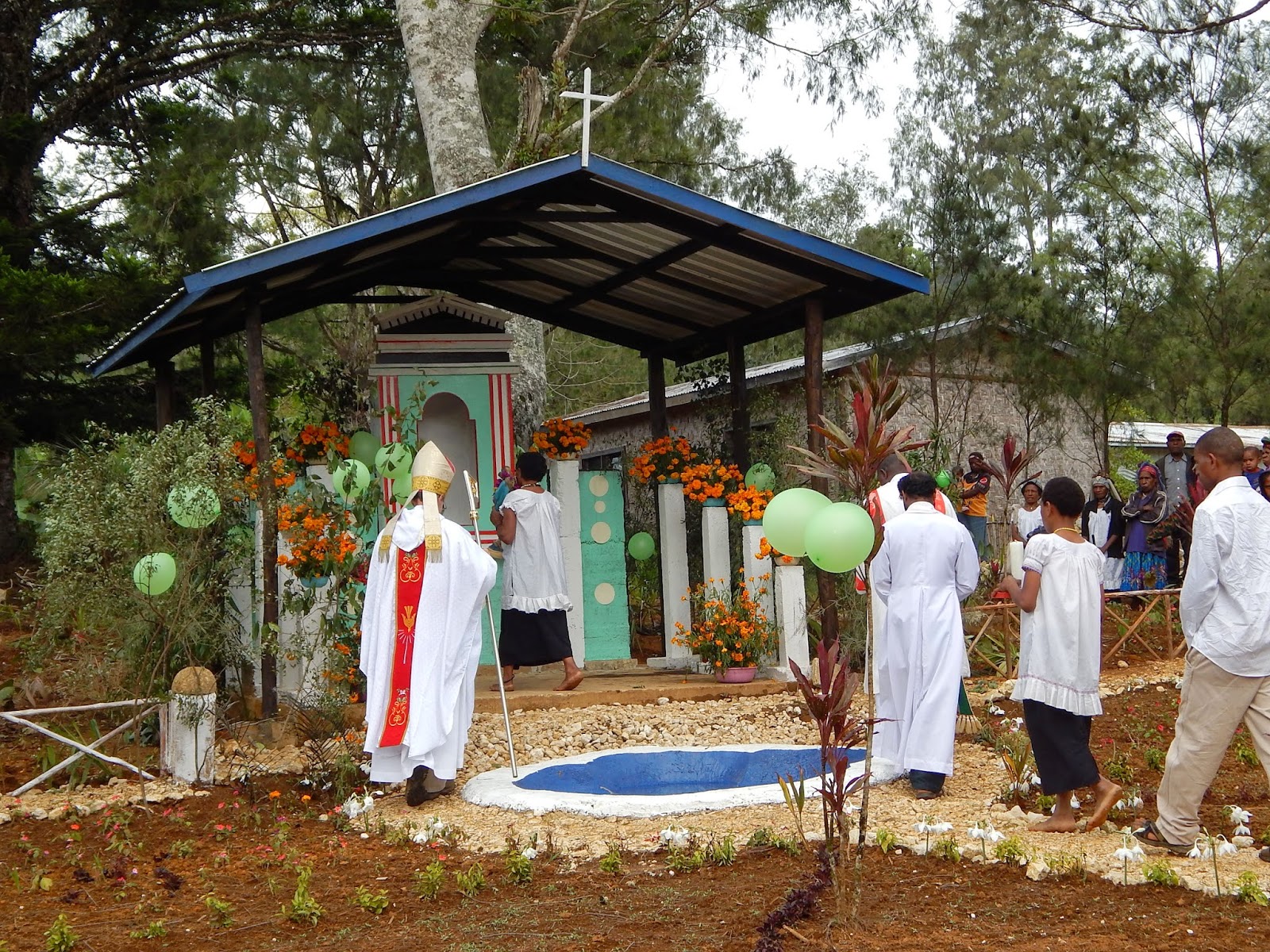 After the blessing of the grotto, we prepared to head back to Tari where I had a meeting of the TSS Board of Governors... after which we began our trip back to Mendi.  It was a journey that brought graces and blessings at every turn.  Thanks for coming along!  See you next time.