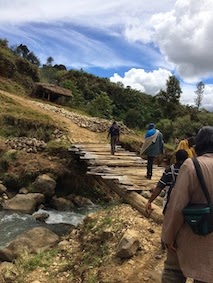 Recently I was invited by Fr Mathew, an Indian Priest from the Congregation of Saint Therese, to come to his parish for the blessing a new Youth Center which was built by the people themselves in the Porondaka outstation of the Margarima Parish.  (Unfortunately the pictures of the Youth Center itself - which was built of bush materials - didn't turn out... But, believe me, it was very impressive!  Basically, it is a large building with a thatched roof, with two large rooms to accommodate boys and girls who will gather their for regular meetings, retreats and religious formation.)

We drove as far as we could and then we began the walk through the characteristic beauty of the Papua New Guinea countryside. 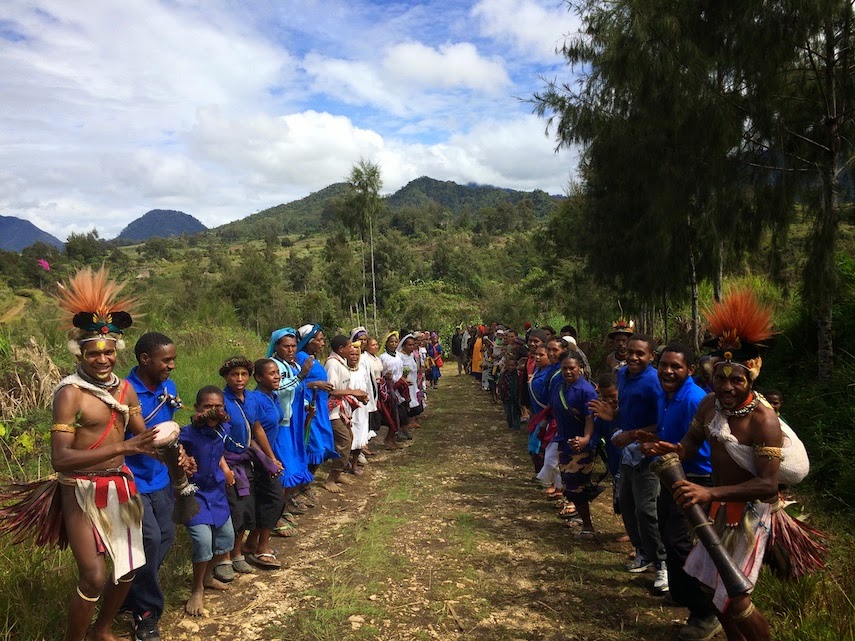 Before we were even close, we were greeting with an enthusiastic group of young people who came to welcome us and "march" us to the place where the Holy Mass would be celebrated and the blessing would take place.  The joy you can see on the faces of the young folks was contagious! 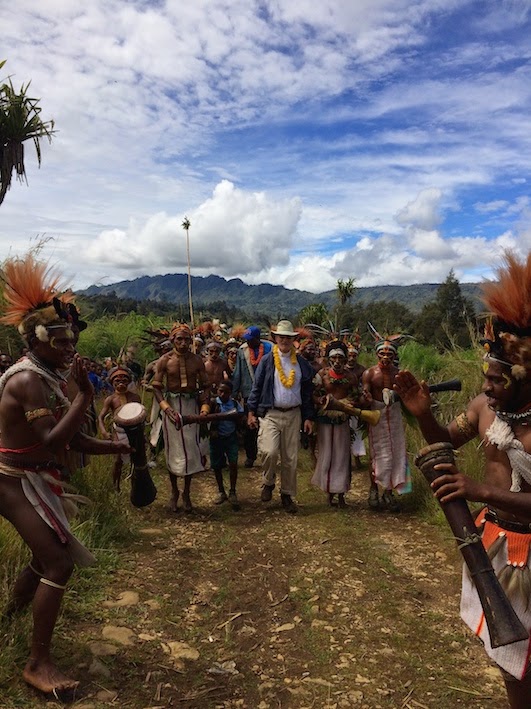 I was not kidding when I said marching!  I joined the line of people in their traditional attire and to the sound of drums and traditional chants of the people we marched to the place where the people had gathered.  (We did take a break every once in a while to catch our breath!) 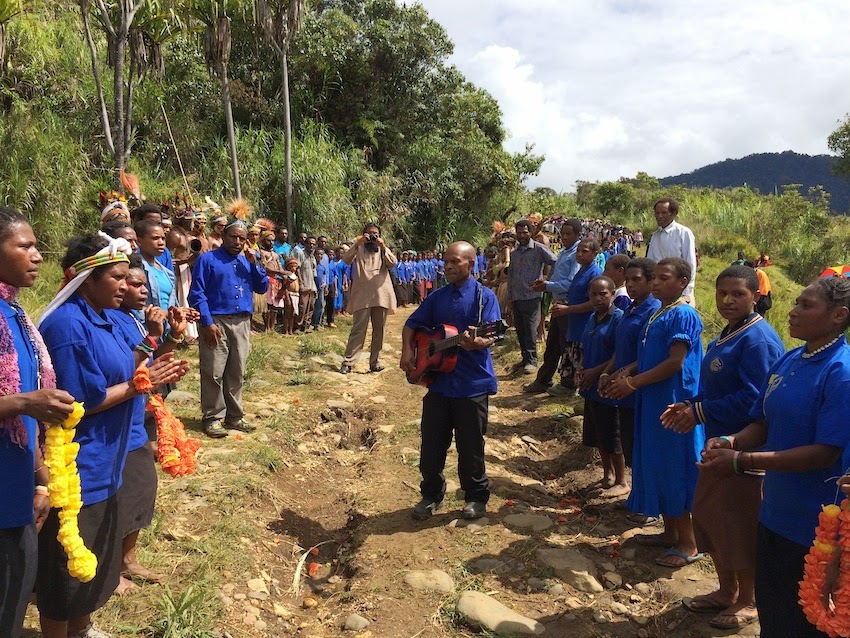 A bit closer to our destination, we were met with even more people who lined the route to the Porondaka outstation.  The young people had prepared a beautiful Song of Welcome and some flowered necklaces for us.  It is a big celebration when the bishop comes to visit.  I am humbled by the simple yet profound faith of the people.  In these occasions, I always remind myself that it is not about me, but about Jesus and His Church. 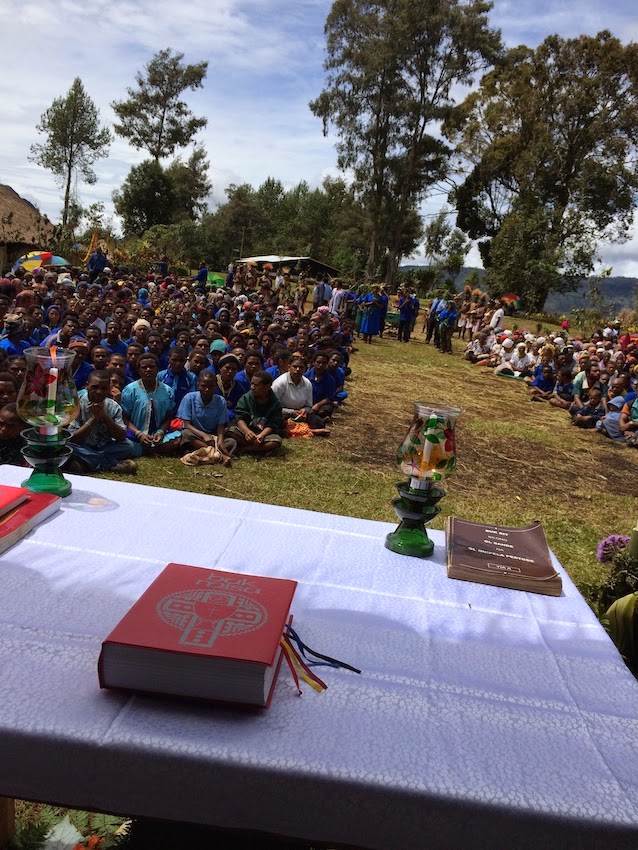 When we finally arrived we found hundreds of people who had gathered for the celebration... Some had walked as much as 14 hours to be there... It was a beautiful day, in the midst of a week of constant rain!  The people took their places on the green grass under blue skies and we prepared to start the Mass. 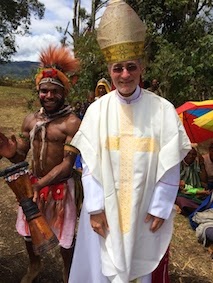 The people are very proud of their cultural heritage.  Some churches forbid their members from wearing their traditional attire and singing their traditional chants...  The Catholic Church sees in these forms opportunities to inculturate and incarnate the Gospel in a faithful and profound way. 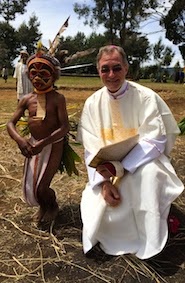 Young and old find meaning and identity in these cultural expressions and are happy to bring them celebrate our one Catholic faith.  (Our young friend is not giving a muscle-man pose... He is actually dancing, (which is usually done in a straight line and in place.) 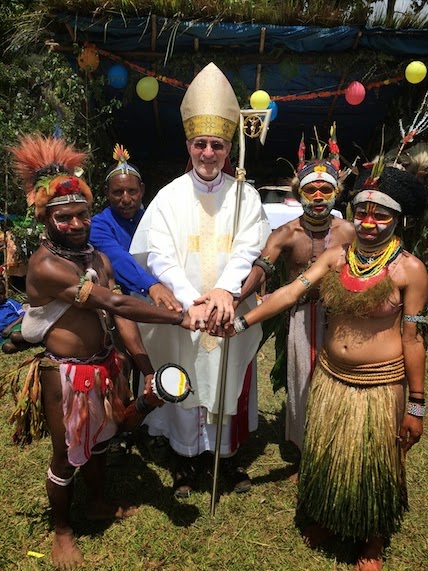 Saint Joseph's Parish, Margarima is in the Hela Province of PNG.  It is the largest parish in the diocese.  (Actually, it should probably be two parishes!) It has over twenty outstations.  There are two major cultural groups in the parish, the Huli and the Obene.  They have completely different languages and traditions.  The territory of the diocese is still plagued by tribal fighting.  Here, members of different tribes show the unity that is the prayer of Jesus Himself and the mission of the Church.

After the Mass, the procession was led once again by our youthful drummers to the nearby Youth Center, which we blessed and inaugurated.  Please pray for the young people of PNG.  They have  many challenges not faced by the youth of other places.  Still, they have the same hopes and dreams for themselves and their families.