Christmas in the bush 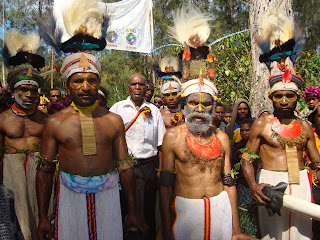 A few days before Christmas I had a late night visitor, a catechist who traveled a long distance to come to Mendi.  He had a simple request.  He wanted me to send a priest to his remote community (named Imane) to celebrate Christmas mass.  In the course of our discussion he told me that there had not be a priest to celebrate any mass (not just Christmas mass) in this area for over three years.  My heart was moved with his passionate plea but also frustrated because I knew that there would be no priests free on Christmas day.  In fact, we still have several parishes in the diocese that do not have priests in them.  Then I got an idea (perhaps I should say an inspiration!).  I was to celebrated the Vigil Mass of Christmas on the 24th and then go to celebrate Christmas Day Mass in one of the outstations of the cathedral...  But, it just so happened that Father John Pfannenstiel, OFM Cap., the Mission Director of the Capuchin Province of Saint Augustine based in Pittsburgh, PA was visiting Mendi.  So, as it turned out, I asked him to celebrate the Mass that I was scheduled for and then I would be free to go to Imane to celebrate the first mass in three years.  (Fr John enthusiastically agreed to the proposal.  He celebrated much of the mass in Pidgin English and Brother Ray Ronan, OFM Cap., translated Fr John's homily given in English so that the people could understand it better.)

I set out very early Christmas morning.  My two guides Markson and Lukson were waiting for me on the road about an hour into the journey.  We drove for about another hour over very bad roads until we could not drive any further.  We left the car at a Health Aid Post run by the diocese and then began the rest of our journey on foot.

The natural beauty in Papua New Guinea is breathtaking and as we began our descent down the side of a rather steep mountain I was again not disappointed.  On the other side of the valley was a magnificent waterfall.  I wanted to just stand there and take it in... but my faithful guides knew that their community was waiting for us near the top of another mountain. 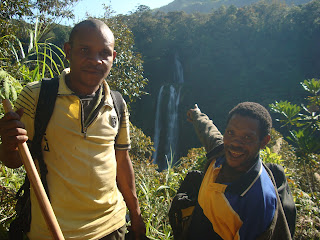 As we continued our descent Markson told me that we had to cross the river over a rope bridge.  When we turned one of the many scissor-back turns I saw what he was referring to.  While I was trying not to think about cross it - the two brothers told me that they have to carry all of their supplies and materials over this bridge; they also carry, 50 lb coffee bags, coffin boxes and live pigs.  Not only that, they have to carry women about to deliver their babies and other sick people to the closest Heath Aid Post. 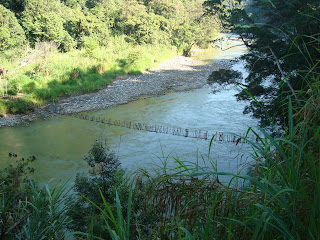 I must confess that I was a bit frightened.  Markson went first and showed me how I should take the steps and how I needed to crouch down in the middle of the bridge because the hand-ropes were lower there.  Lukson walked behind to give me words of encouragement.  I found that I had to look straight ahead, because looking down at the rushing water gave the impression that the bridge was swaying and made me a bit dizzy.  In my younger days, I probably would have said that it was fun.  Suffice it to say that it was exciting! 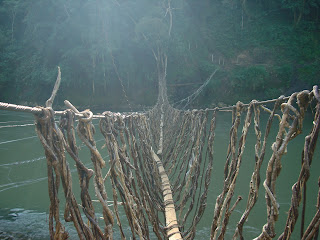 When I got my legs to stop wobbling, we started our steep ascent on the bush track up the side of the mountain.  From their conversation, I could sense the anticipation growing in both of my young companions.  We finally got to the top of the mountain and then continued for about another 45 minutes.  As we drew closer, to the village I heard the familiar beat of the kundu drums and the traditional chanting.  Hundreds of people formed the joyful welcome march with several men dressed in traditional attire leading the group.  The Mama's Group was also part of the welcome festivities.  After a welcome song by the young people, we marched to the place where Mass was to be celebrated.  They had erected  a small grandstand and had decorated the area beautifully with flowers and plants.

Catholic people from four neighboring villages came together for this joyful celebration.  Even though the people had not celebrated mass for three years, they were well-prepared by the catechist.  The people were enthusiastic and reverent as they participated in the celebration of this Christmas Day Mass. 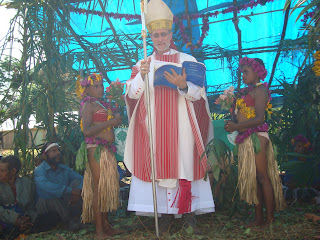 As I prayed the prayers of the Mass, I could sense the strong faith of these strong people and their deep love for the Church and Jesus in the Eucharist.

The long trek back to the car seemed to go much easier because I was accompanied by a large group of young people who carried peanuts, bananas and other garden food which the people gave to me in appreciation of my visit to them.  They were eager to share their stories and their hopes and dreams.  As I walked along, I was aware of my humble part in bringing the Lord to this remote community in the deep bush of Papua New Guinea --- however, in the experience of the faith and love of these good people, I gave thanks on this Christmas morning that God is indeed with us! 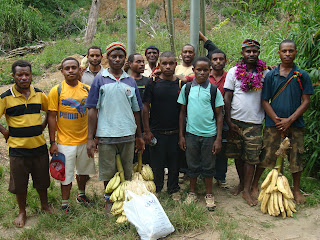 To all friends across the miles, I wish you a Blessed Christmas and much health, happiness and peace in the New Year.
Posted by Unknown at 5:28 PM